On the Dichotomies of Movement

Adversarial machine learning is based on the idea that algorithms can learn via competition. When you train an adversarial neural network, you initiate a loop of two neural networks, the functions of which are programmed to oppose each other. Because their roles are antagonistic, they strengthen the neural network as a whole. The same principle lies in the heart of adversarial Infrastructure – its seemingly conflicting functions fueling the overall efficiency rather than cancelling its effects. Adversarial Infrastructure is favoured by colonial regimes that simultaneously aim for connection and disruption. Even though in my research I analyse Russian colonialism, it is easy to find cases of Adversarial Infrastructure in other colonial states like US. The American highway infrastructure, labelled as “white roads through black bedrooms” or “roads to nowhere,” was built to inflict racial segregation in the cities torn apart by redlining – urbanist practice of creating racialised ghettos. Adversarial Infrastructure shows how colonialist rule strives to connect the land to fuel its exploitation and mobility of white people while enforcing segregation. Such a counterintuitive combination makes it especially hard to contest adversarial infrastructures. One function hides another as if segregation was inevitable technical drawback rather than an integral part of the political project. It follows the logic of colonial infrastructures that carry military functions while being advertised as civilian. Indeed, countering only one of those functions at best leaves another untouched, at worst strengthening the Infrastructure, as such “antidote” is already at play making it more efficient.

I have coined the term adversarial infrastructure while investigating the attack on the Ukrainian ships in the Kerch Strait, situated between Russia and Crimea, that was carried out by Russian coast guard on the 25th of November 2018. Back then, all Russian pro-governmental media followed the prosecution of Ukrainian sailors by a nation-wide outcry that they had crossed the Russian borders without seeking permission. Some independent media chose the tactics of geolocating the ships attempting to see if the border was crossed, measuring the border by international law. Others tried more down to Earth approach in attempting to solve the juridical puzzle of whether at all the border could be drawn in the illegally occupied area. After the annexation, it was impossible to make an agreement on a new border regime between the countries, and it was unclear which of the agreements that had been made before 2014 were still at play. Reading the laws implemented in an attempt to draw a timeline of the local border regime, I came across an interesting temporal loop, as in 2003, Russia attempted a small-scale version of the Crimean annexation. I didn’t remember it – both because I was a kid at a time but also because it is always hard to grasp all the turns propaganda took backwards. That year Russia tried to connect the Ukrainian island Tuzla, that lies between Crimea and Russia in the Kerch Strait, to the Russian mainland and therefore claim it Russian. Obviously, 3 square kilometres of the land with no taxpayers would not usually interest a colonial empire enough to invest in 24/7 construction of the infrastructure that involved three shifts of workers. The reason Russia got interested in the island was that if it had control over Tuzla, it would allow Russian ships to pass through the Kerch Strait without paying Ukraine. The part of the Kerch Strait between Tuzla and Russia is too shallow, so Ukraine had a monopoly on both shores. In 2003 Ukraine made a shortcut – it granted to Russia equal access to the strait, which was the initial goal of the Russian attempt to annex Tuzla Island, so the Ukraine didn’t give up the island. This agreement, enforced by Russia, made irrelevant its claims in 2018 that Ukrainian ships have attempted to trespass because the trespass is impossible no matter where the border is drawn. Under this 2003 agreement Russia could access the Kerch Strait despite the Ukrainian monopoly on both shores, Crimea and Tuzla. So even if Russia would claim monopoly on the shores after 2014, Ukrainian ships still have equal rights in the Kerch Strait.

But there was something else in this sample of Crimean occupation – this infrastructure that was used to annex Tuzla Island seemed intriguing. This construction was named a dam and the Crimean Bridge was built as a very material continuation of it. They shared not only the location and the base but also the function. In 2003 Russian prime minister Mikhail Kasyanov stated that new border in the strait could be drawn by the new dam that is being constructed. The current iteration of the Crimean Bridge shares this function – ships are not allowed to pass under it because it is implied that the Bridge presents a Russian land. Therefore, someone could threaten this newly created Russian land – even though technically trespass would not be possible. This new policy could be witnessed through an escalation of waiting zones in size and waiting time since the construction of the Bridge. 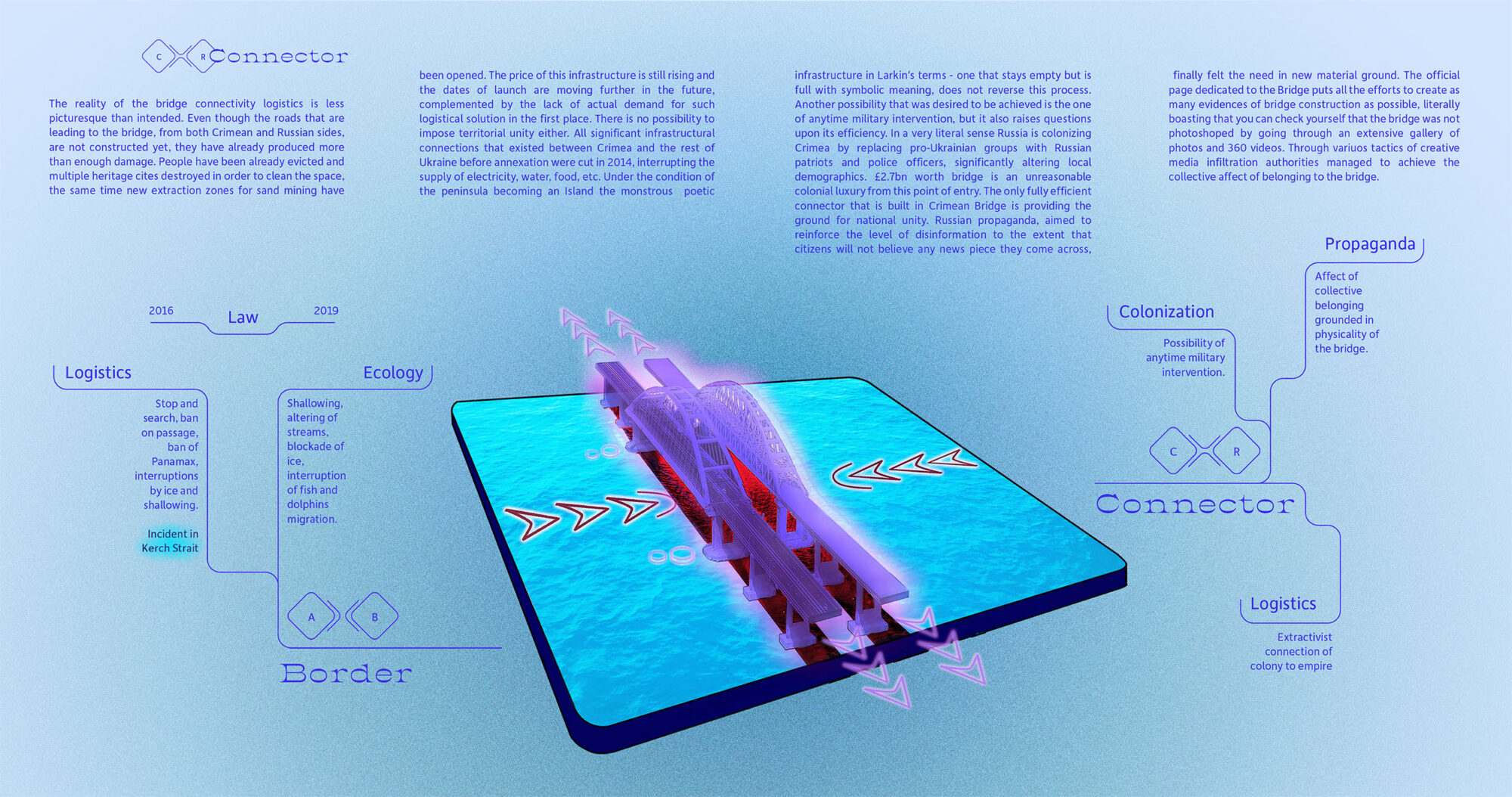 The Crimean Bridge allows seeing how the economic blockade of Ukrainian harbours is combined with the expansion into Crimea. It is something that could not be explained if we understand roads and bridges as aimed simply for connection, which is why I felt the need for the term “Adversarial Infrastructure.”

You can see investigation via the link: https://crimeanbridge.info/home

Anna Engelhardt (b. 1994, Kostroma, Russia) is a media artist, researcher, and writer based in London. Her main interests are the (de)colonial politics of algorithmic and logistical infrastructures in post-Soviet space. Being concerned with the notion of infrastructure as a form of politics, she develops her practice through writing and manufacturing digital infrastructures. Anna engages her background in critical theory to provide conceptual frameworks for her projects, conducting the investigations through the construction of virtual landscapes, materialised as online platforms and 3D computer graphics.