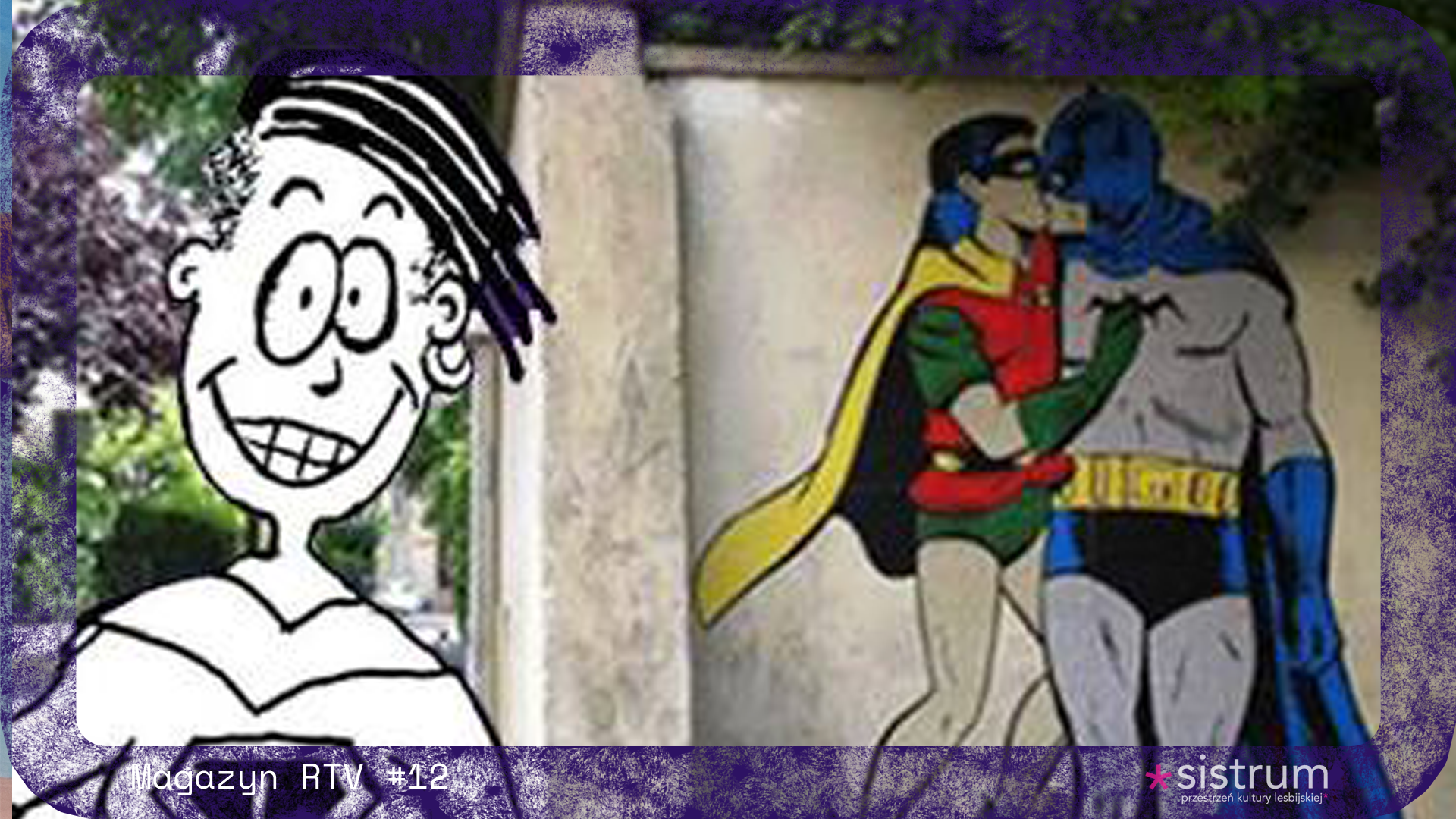 I am the author of Super Lesba, an LGBTQ+ comic strip. I created it between 2013-2016. At the time, it was the only LGBTQ+ comic strip in Poland that directly depicted a lesbian heroine. It remains the only Polish comic strip with a non-heterosexual superheroine. Super Lesba is mostly available online, but occasionally it also appeared in print, as a single-page printout, distributed mainly at lesbian events. 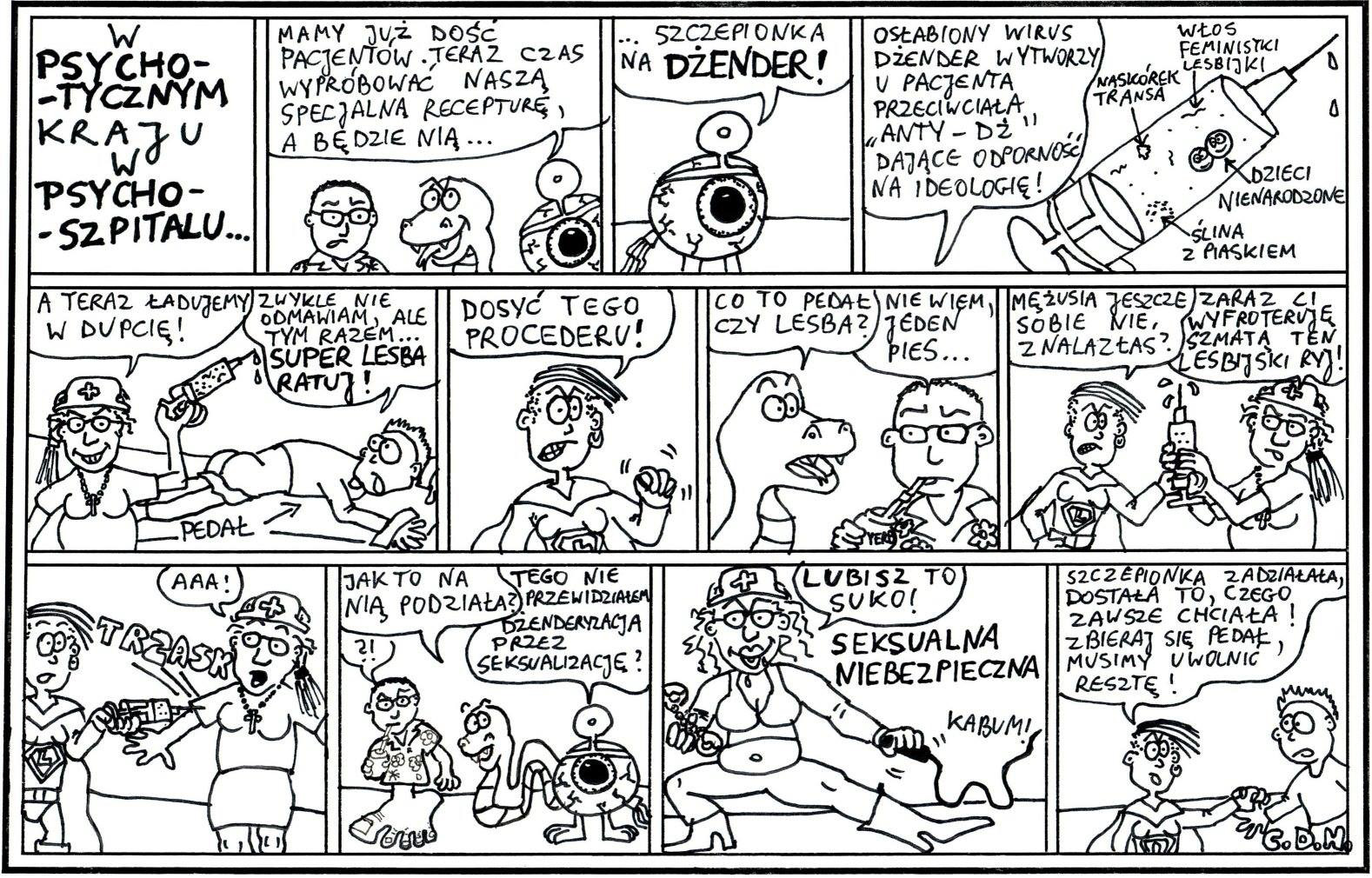 Super Lesba is a superhero that fights homophobia and fascism, as well as those who are responsible for it: Polish politicians, football hooligans, and the Catholic Church. Like every superhero, she possesses special superpowers: a ring on her thumb that strikes opponents with a rainbow, a “buzz-finger” befitting any decent lesbian, and “nip-radar” responding to women who “play on the same team.” The cartoon is sarcastic and not entirely serious at all.

What led me to creating it was growing homophobia in Poland. The fact that I was working at a public institution at the time has certainly helped – I had more free time on my hands, but also, that institution was not free of prejudice. There were many LGBTQ+ jokes at work, and my boss was associated with Ruch Światło-Życie [Light-Life Movement, one of the movements of renewal in the Catholic Church in Poland] and wore homophobic t-shirts at work. Growing frustration and not being able to come out at work motivated me to do something, and since I was drawing comics since childhood, they are a natural form of expression for me. The idea for Super Lesba came during a trip with my friends to the Open’er Festival. After some conversations and joking over a beer, the first drawings appeared and then that was it. From clunky black and white lines of average quality, through photocopies, to a comic strip published on Facebook.

My work was not immediately popular; I faced a lot of criticism from the LGBTQ+ community. The heroine was deemed to be too stereotypical, too masculine, so it was argued that the comic “is not representing anyone.” I was also criticised for its aesthetic value, because I didn’t go to the Academy of Fine Arts. It was sad that the LGBTQ+ community impose what a woman and a lesbian should look like, but also that – in general, for most people – only those who graduated from art schools are allowed to draw.

The comic only gained a lot of likes when I depicted the burning rainbow in Zbawiciela Square. My superhero dealt with a bunch of football hooligans and saved a burning rainbow. This gesture was needed at the time. People felt powerless, so to escape into this fantasy world was a kind of solution. Following a positive response, I started to add more episodes mocking Polish politicians and showing the absurdities of Poland’s alliance with the Church.

The ideas for the subsequent drawings just came to me after that. Gradually, I switched from pencil to computer programs, mainly Photoshop and Clip Studio Paint. Gradually, I turned to colour. Together with my girlfriend, Ula, we combined Super Lesba with music events for the LGBTQ+ community, organised at the Eufemia club in Warsaw. We DJ-ed under the banner ‘Super Lesby’, and handed out comics at parties. Lots of people would come; the atmosphere was wonderful. Gradually, I moved to the Tumblr platform, where I was already uploading longer forms. I created two series: “Super Lesba – the beginning” and “Pains of adolescence”.

In the first, I continued my reflections on the political situation at the time, and in the second I focused on showing my protagonist growing up, and finding her lesbian identity. While drawing the second series, I got a lot of positive comments from young people, for whom the comic turned out to be great support. In the meantime, my Facebook page was reported – possibly by the far right – as offensive. Some people were offended with me freely drawing lesbian sex, using profanities, and making fun of the Church. Under the guise of reporting the word “dyke” as offensive to lesbians themselves, Facebook regularly blocked my site. At one point, I even had to change the name of page to “Super L”. This, unfortunately, had a negative impact on visibility, and page-view ranges began to drop. I couldn’t post new instalments, and people gradually lost interest, and I lost the will to draw. The comic was supposed to serve people, so if I couldn’t upload on the most popular social medium, which was Facebook, what was the point in making it? Fortunately, not everyone forgot about Super Lesba: in the meantime, there was an interview with Replica and a broadcast on Radio RDC. 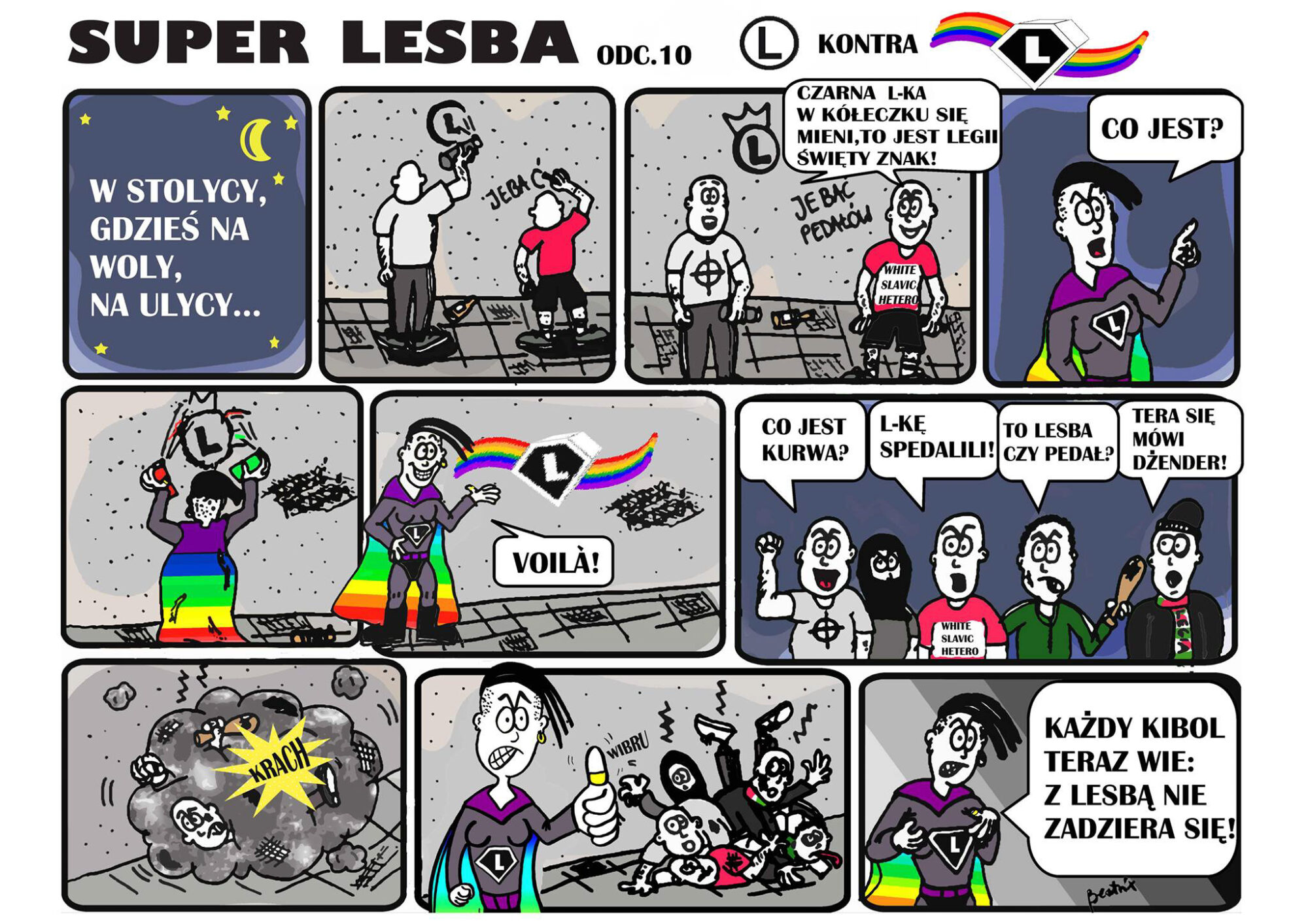 A positive event related to Super Lesba was my work being shown at the Schwules Museum in Berlin at the exhibition “Super Queeroes – our LGBTI Comic Book Heroes and Heroines”, which took place from 21 January – 26 June 2016. It was the first exhibition in the world to feature comics featuring LGBTQ+ people. It focused on traditional superheroes, i.e. X-men, Catwoman, Batwoman and other heroines and heroes of Marvel and DC Comics – but also superheroes, LGBT people who fight discrimination every day, and the authors of LGBT+ comic strips, people who are kind of heroes and heroines in their countries. The exhibition included work by such outstanding artists as Alison Bechdel, the author of, among others: Fun Home, Are You My Mother? or the series Dykes to Watch Out For; Howard Cruse, author of Stuck Rubber Baby a poignant graphic novel combining aspects of homophobia and racism, or the well-known Tom of Finland, author of homoerotic illustrations of gay bikers and leathermen. Super Lesba represented the block of independent comics from Eastern Europe. Shortly after the exhibition, in the same year, I took part in the Comic Invasion Berlin comic festival, where I exhibited work referring to the exhibition at the Schwules Museum. 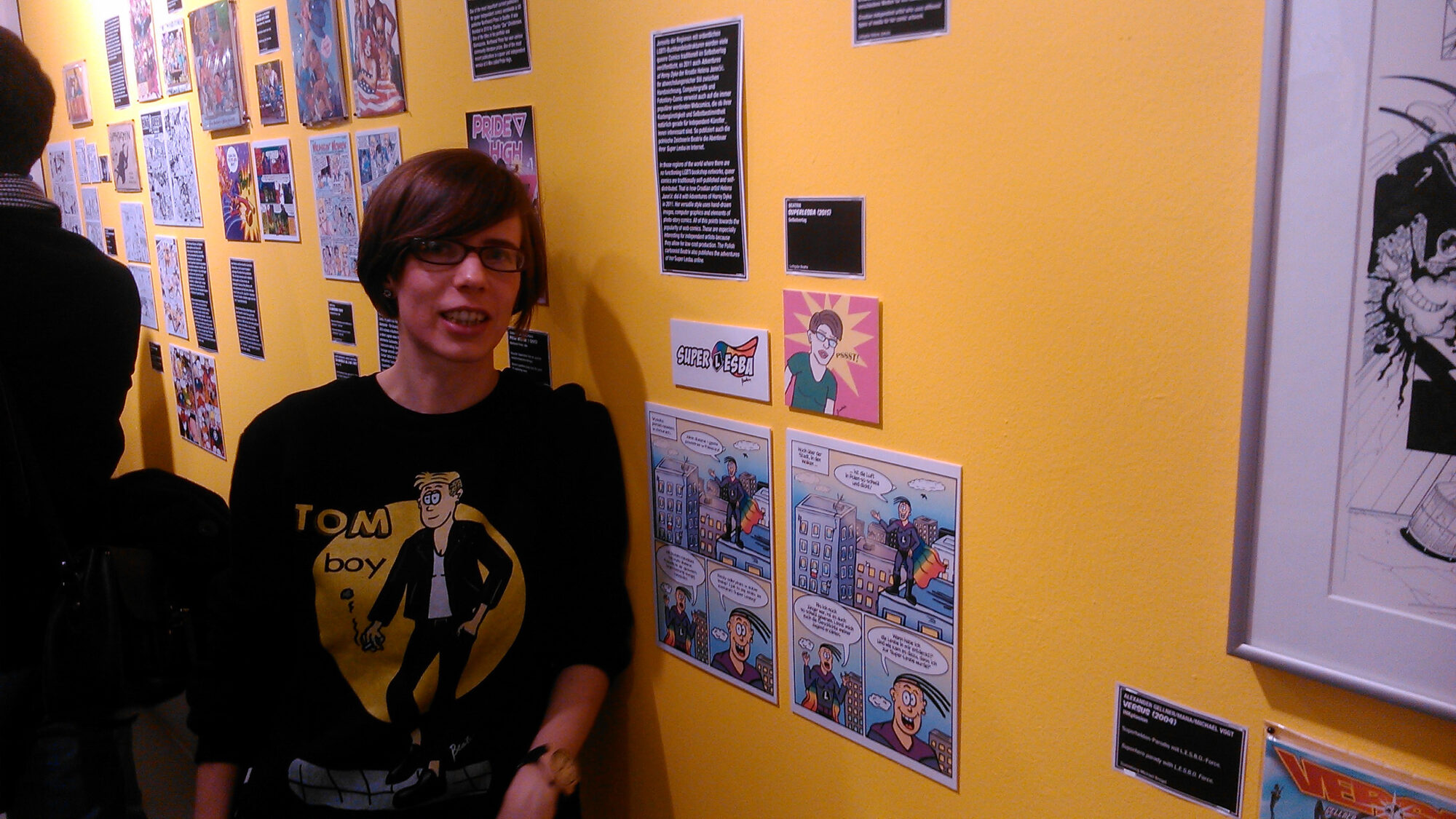 I continued drawing Super Lesba for a short time after the exhibition and the festival, but life forced me to look for a new job and focus on work. Drawing faded into the background. Later, I focused my artistic expression on designing t-shirts. Will I return to Super Lesba? Time will tell. But it seems to me that this chapter of my life is finished now.

BEATRIX – born in Łódź, lives in Warsaw after escaping Łódź. A biologist who is into healthy diet, nature, and queer culture. She has been drawing since the age of six – she started with school magazines, and then student newspapers. After a short break and studying biology, she returned to drawing with her own comic strip, Super Lesba, which started out on Facebook and moved on to Tumblr. She creates comics and illustration focusing on queer issues, health, animals, plants, and people as well as children’s illustrations, simple animations, and gifs.

She participated in the exhibition “SuperQueeroes – Our LGBTI Comic Book heroes and heroines”, 22.01.–26.06.2016 at the Schwules Museum in Berlin, she created animation for the TV series “Table”, and illustrations for a computer game about marital equality in Poland.