DEAD TREE AS A NEST OF A NEW LIFE

When I first visited the National Park Volcán Nevado de Colima in October 2018 in order to see the mural painted there by Daniela Monserrat Ramos Mayorga, I did not know that the following month I would be working as a volunteer, for a week, at the altitude of 3400masl nor I knew who would be my guide to the summit of the volcano. However, I was sure of one thing. I wished to return to that mystical place at all costs and I started to look for a way to achieve my goal. How could I combine my research about Mexican female street art and be a part of environmental activism?

I decided to speak directly to the manager of the park, José Villa Castillo. To my surprise and delight, I was provided with free of charge accommodation and was admitted as a volunteer to work six hours a day in a forest nursery where pine trees (Pinus hartwegii) are planted so that regular reforestation could take place. If you consider the fact that illegal logging converts the forest into a graveyard, then I hope you will agree with me that planting new trees is vital for any park which faces the same problem so that it does not disappear.

One of the objectives set by the board of the park back in 2006, was to raise the consciousness of the inhabitants of the two states by developing educational projects (CONANP, 2006, p. 104). Ten years later art was included as a strategy and a call was opened for the Mexican artists to paint murals in the streets of Ciudad Guzmán and in 2017 on the volcano Nevado de Colima. A pair of young artists who studied Visual Arts at Guadalajara University, Daniela Monserrat Ramos Mayorga and Roberto Vázquez Hernández, won the competition. They worked together on three murals. Two of them still exist, on Leandro Valle 39ª Street and Cristóbal Colón 655 Avenue. 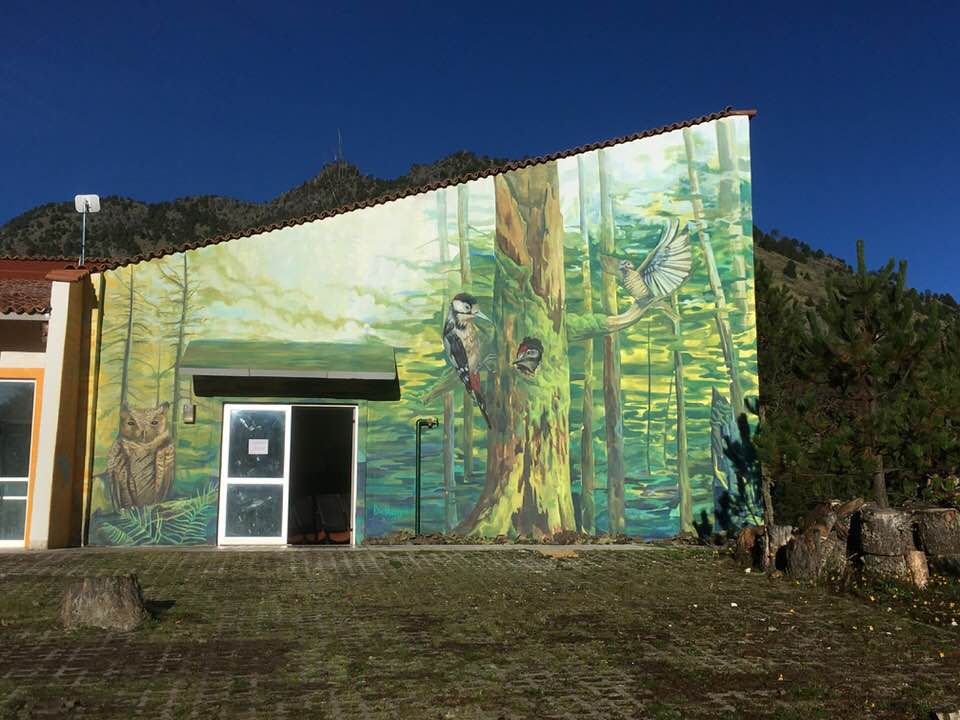 In 2017, however, only Mayorga was invited to create her mural on the Nevado de Colima volcano. The topic Mayorga was given to work on was Dead trees and she called her piece Dead Tree as a Nest of a New Life.

Description of the Mural

Mayorga started painting the mural on the 24th of September and finished it on the 6th of October 2018. It was painted on the outside wall of a cabin where conferences and meetings for the scientists are held. The wall has a trapezoidal shape with its maximum height of 7 metres and a minimum of 4 metres. The base is 10.20 metres long. The artist chose her favourite technique, acrylic paint. She used brushes for the details and a roller for the background. She opts for rather simple backgrounds and a few elements that would catch your eye. In the centre, we can observe a dead tree covered with moss and two woodpeckers that normally choose this kind of a trunk to build their nest. There is a 2 metres high owl on the left-hand side, which is looking at us in a way that suggests that it is the guardian of the forest and we, merely visitors, are on its premises. There is also a small grey woodpecker with its wings spread on the right. The bird is flying over a broken trunk in which we can see that a seed germinated inside, hence the tree is used as a pot. A new tree was born inside an old one.

The artist is particularly interested in the texture of walls that is why, at the bottom, she glued some birch, pine cones, branches and moss. The mural became a relief. Unfortunately, the relief had to be removed after a week as the foresters observed some damage: the water that came with the rain and the fog meant that the wall, because of humidity, would decay.

But what does exactly Mayorga’s painting mean? What is the message behind it and finally, what is a so-called dead tree?

Dead Tree as a Nest of a New Life

Competing for nutrients and sunlight, ageing, damage provoked by bolts of lightning or storms, pest or disease are the main factors that explain why trees die. Some of them, due to the damage mentioned, eventually fall down, the rest of them remain standing (Chávez-León, 2016, p. 5).

It turns out that in what we would call a dead tree there is still so much life as if these dry trunks refused to give up. According to Dr Keith Kirby, from the Department of Plant Sciences at the University of Oxford, United Kingdom, dead wood is the richest habitat within a healthy forest. It supports a huge variety of wood-boring invertebrates and an array of fungi (Smith, 2004). 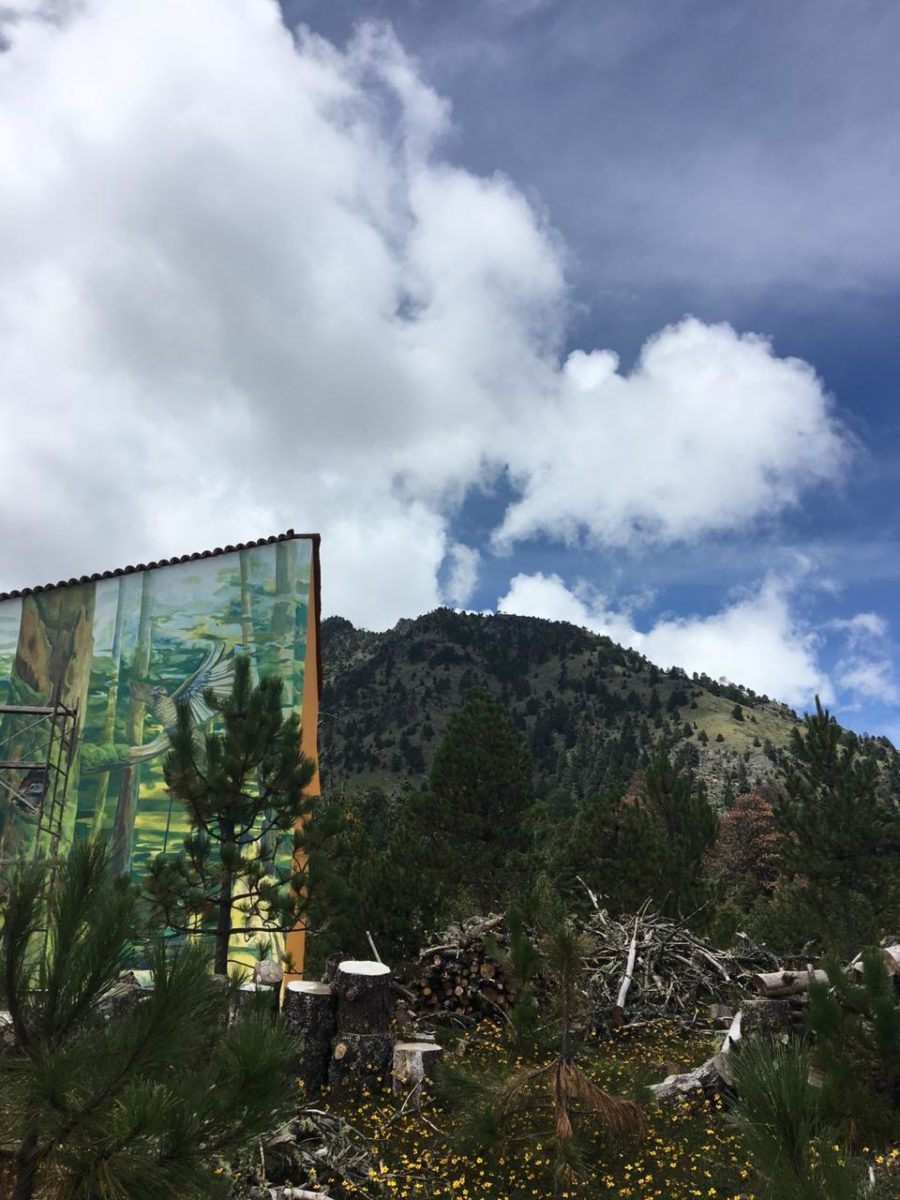 The veteran trees are also perfect places for hole-breeding bats, birds, a wide range of reptiles and amphibians. When bark breaks, animals are able to hide from predatory species and harsh weather conditions and since most of them feed on insects, they help to control the forest pest. Furthermore, the majority of 138 bat species that inhabit the Mexican forests are insectivorous. Only one bat (Myotis spp.) can eat up to 1200 mosquitos per hour (Chávez-León, 2016, p. 7), which should be considered vital for human health as in Mexico mosquitos transmit dengue, chikungunya and zika, not to mention the fact that there are not approved vaccines for humans nor effective antiviral therapies. 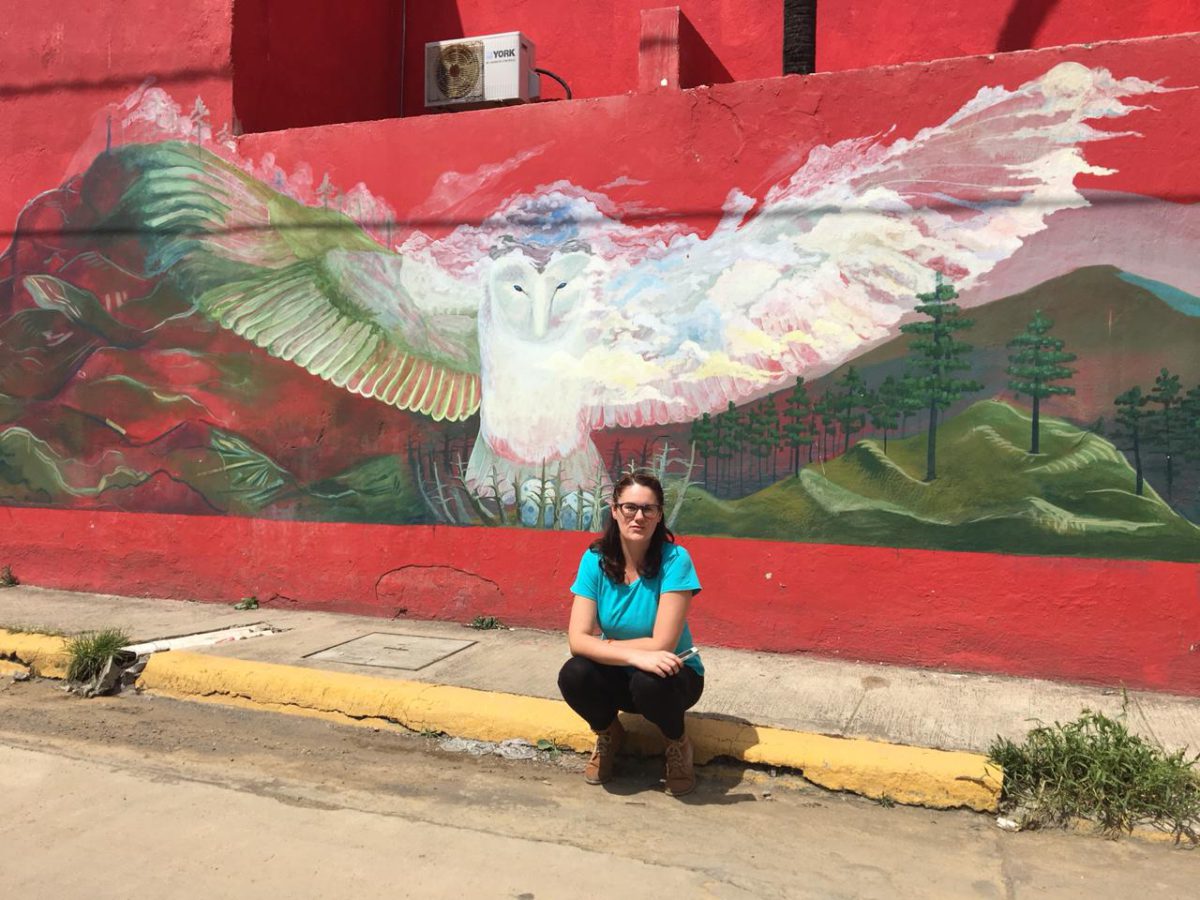 What would happen if we got rid of such trees? The answer to this question is very simple: the population of the animals mentioned above would diminish. Moreover what looks dead to us is in fact protected by the neighbour trees. The process takes place deep down in the ground with the help of roots. Sometimes everything is about that feeble connection of the fungi layer that guarantees the exchange of nutrients. The scientists from the Harz in Germany discovered that this exchange, together with the help that comes from the neighbours, is actually an established norm which makes forests a super-organism (Wohlleben, 2016, p. 12).

Trees function in this manner because together they are stronger. A single tree does not make a forest, does not create a balanced climate, will not be able to cease a storm that could demolish some of them nor cease the summer heat that penetrates the soil, dries it and makes it prone to the conflagration. Trees know that their community should stay united at all costs. If they were selfish, many of them would not reach adulthood. Do they not resemble our society? Peter Wohlleben, a German forester, compares trees to a herd of elephants as they look after their congeners and help the sick and the weak. I would compare them to a three-generation family. Wholleben adds that each tree is important to the community and it is worth keeping it as long as it is possible (Wohlleben, 2016, p. 12).

We should leave the dead trees to decay gracefully but unfortunately, out of our obliviousness, we tend to keep the forest tidy, so the dried limbs are carted away for public safety reasons or for firewood.

The last week of November 2018 I spent working in the forest nursery Vivero de alta tecnología Oyamel. Having breakfast and a cup of hot coffee belongs to my daily routine. Nothing unusual you might say. But if you take into account that in the cabin where I slept, hidden in a sleeping bag and under three duvets, the temperature at night dropped to 0 Celsius degrees, then having at least one hot drink or meal a day becomes a part of a survival approach.

The altitude does not help, as at the 3400masl, my lungs struggled, after a few hours of work I felt as if I had run a marathon and my mouth suddenly became blue. At that time I was not sure whether it was because of the low temperature, humidity or simply my heart was not used to operating well in high mountains. So those were not one of the most comfortable moments in my life. Instead, the days turned out to be one of the best experiences in my life. I worked with an amazing and helpful group of foresters. My task was to cut the weakest pines, if two or more germinated in the same pot, and leave only the strongest tree. Sooner or later they would compete for nutrients and as a result, neither of them would survive. Pot by pot I would observe them carefully and make my decision: which one should I spare today?

I found out in the nursery that it takes half a year for pine to become as big as a thumb of an adult person, three years to be like my hand and up to 300 years to be as high as a two-floor house. I also learnt how to plant them, mix the soil, basically, how to look after pine trees hoping that they will reach adulthood eventually. But there is no happy ending to this story.

On Sunday, which was my day off, I decided to climb the volcano. My guide to the summit was Manuel, a chainsaw operator from  Tenochtitlan (the name and surname of the guide as well as the name of the place have been changed for security reasons). In 2007 the cartel from Michoacán came to the forests of Tecalitlán, Pihuamo and Jilotlán. Chainsaw operators are hired by drug dealers voluntarily by force (Castillo, Bosques que caen por mandato de los nuevos caciques, 2014, pág. 6) to stock hard wood which is purchased by China (Castillo, Bosques que caen por mandato de los nuevos caciques, 2014, pág. 6). These men actually do not have any choice, either they submit to the cartel or they will be killed. If they are lucky enough, they might run away from their home village but standing up to organised crime, there, in the mountains and in the forest, seems pointless assuming that you wish to be alive and protect your family.

The biologist Sonia Navarro expressed her concern about another problem the park has to tackle: conflagration, both accidental and provoked by people, in order to prepare the land for growing avocado. The forest is literally disappearing at high speed and the felines like lynx, ocelot, jaguarondi or oncilla are hardly seen these days (Castillo, 2014). In Mexico avocado is called green gold as it provides a substantial income for the plantation owners. They earn more than from legal logging.

Only a certain amount of wood can leave the forest each year, having been marked previously. Theoretically, no tree can be cut down if it shows no sign of pest. But the reality is far too brutal. When the Forest National Committee (CONAFOR) was founded in 2001, it admitted that half of the wood that entered sawmills did not bear any legal marks nor any documents that could prove its origin. Regrettably, it seems that 17 years later the situation has not changed (Castillo, Bosques que caen por mandato de los nuevos caciques, 2014). 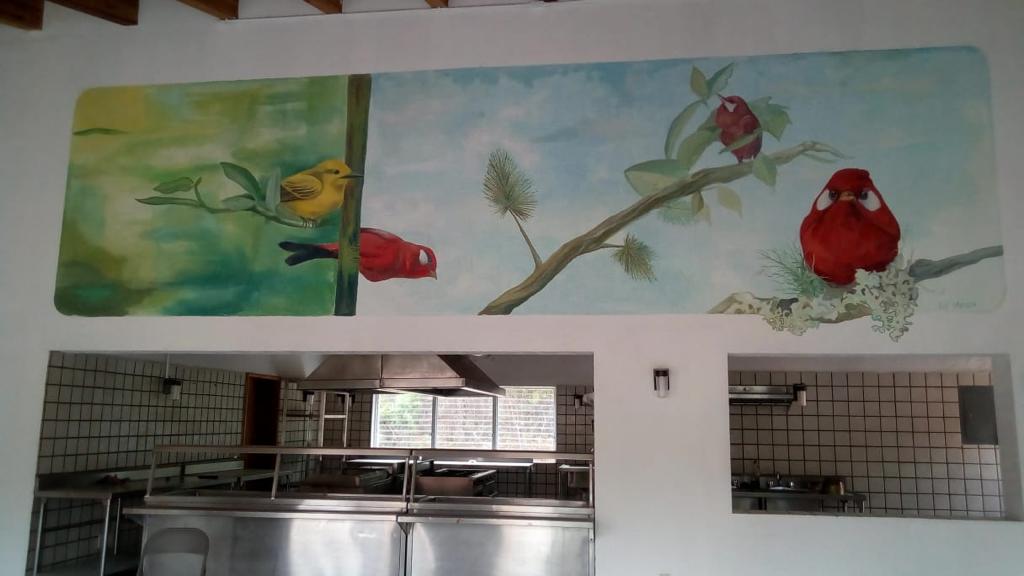