IF COMMUNISM WAS A VIRUS THEN CAPITALISM IS AN ILLNESS

If communism was a virus then capitalism is an illness. If neo-liberalism and global colonialism are the emanations of patriarchy, then the only way to change is de-colonial eco-feminism. Ecofeminism is not an easy medicine. It is not an antidepressant pill to swallow. Eco-feminism represents a multitude of strategies. It is an obligation to our planet understood in a variety of ways.

In the Polish version it may be putting in practice the slogan proposed by the organisers of this year’s Forum of The Culture Future ‘Feminism! Not Fascism.’ As part of the poetic slam in Powszechny Theatre in Warsaw, the participants talked about how to protect shared space. The Project of Citizens’ Anti-Smog Law act was presented. There was also breakfast with climate consumed accompanied by Joanna Rajkowska, Olga Tokarczuk and Agnieszka Holland. Eco-feminism is no longer a narrow stream, but it is a river, which sweeps away. The pop hero of eco-feminism is Janina Duszejko from the film made by Holland. Holland based the movie on a book by Olga Tokarczuk (Drive your plough over the bones of the dead, 2009). The anti-hero is the hunter – his attributes, moustache and a gun. He subjected the earth according to the bible’s permission. The opposition and resistance towards the global system, in which one part of the planet kills the other by using hard and soft infrastructure, by sucking up the resources and vital forces, connects in eco-feminism with a local fight against developers or catholic warlords, who cut down wilderness and trees in a local square. The territory of eco-feministic interventions spans from earth and placenta to waters and oceans.

You are of the place and the place is of you. (Katerina Teaiwa)

During the panel on the subject of indigenous nationalism and cosmopolitanism, which was organised in Berlin’s The Haus der Kulturen der Welt by a research group dealing with the concept of minority cosmopolitanism,2 Katerina Teaiwa spoke about the de-colonial strategies of women living on the Pacific islands, who after the birth of a child would bury the placenta to keep the contact of children with their land against the colonisers’ politics. Somebody else brought up the fact that in the Maori language the word for land denotes placenta. The exploration of the layers of land and excavating the natural resources by the colonisers represents a continuous rape. It is a violent relationship.

In this type of discourse, it is not about condensing the essence of feminity, simple metaphors or dichotomies: female-good; male-bad. It is all about the return to the old – pre-capitalistic – way of thinking about our relations with Mother Earth and with everything that lives and exists. It is about the environmental justice seen often as a romantic idealism, a struggle with windmills. 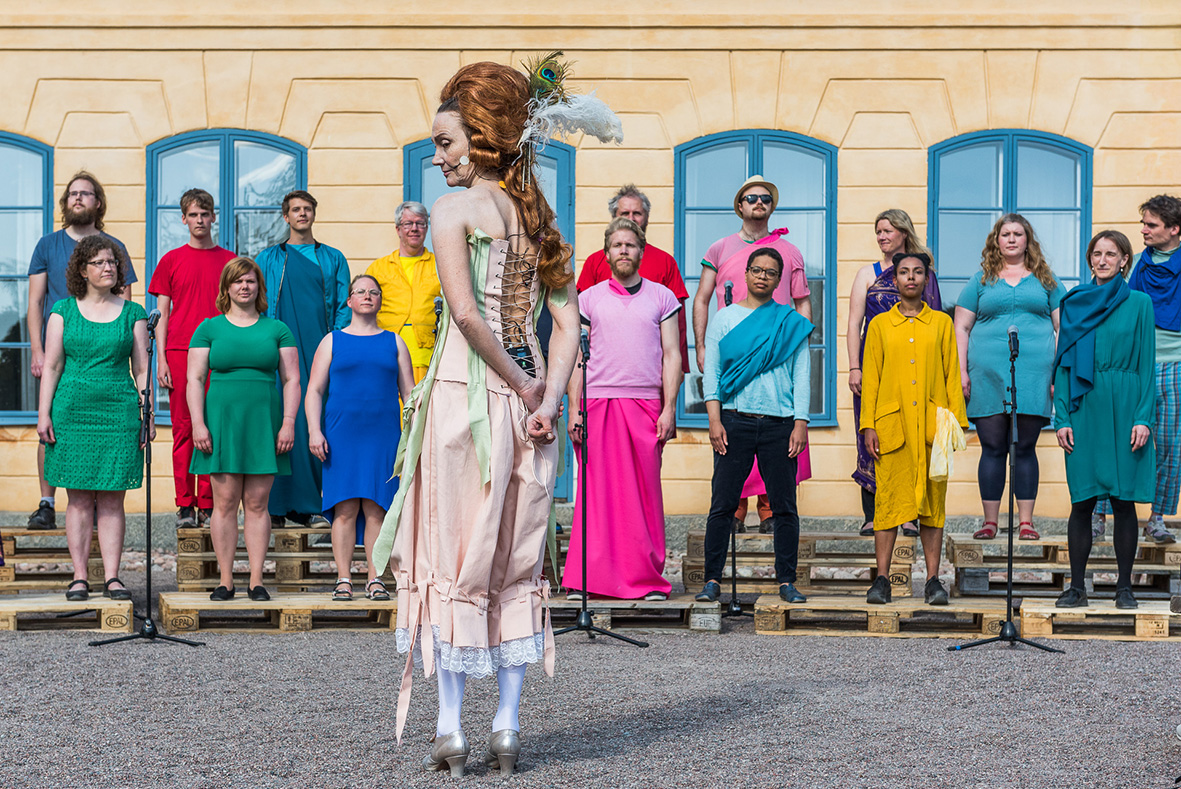 During the already mentioned discussion, the activists and poets argued that it is the only realistic perspective; a maturity, which depends on admitting the actual fact. We are standing heading the ecological Armageddon, which was animal spoken by Katarzyna Kozyra in her latest work entitled ‘The Dream of Linnaeus’ Daughter’ (2018). (il. 1) The tragic-comical ‘Ode to Joy’ is barked and grunted by an animal choir. Upon finishing, the artist pours over herself and others the streams of water. This work not only dilutes the species’ border-lines between the human and non-human but also in a symbolic way, through water, connects both worlds.

At the discussion in HKW an artist and a scientist from Ecuador, Jose Benjamin Inuca Lechon, stressed that we are from each other. Lechon said that what we eat must be good for us and for the land. The principle, which defines the existence of humans, is not based on subjecting nature and capitalising everything. It is based on mutuality. I am talking about complex and mutual relations: with seeds, earth, sun, other people and most of all with water. The relational ethics of water may be – as it is proposed by the contemporary hydro-feminism – an alternative optics in Anthropocene.

We are all bodies of water. To think embodiment as watery belies the understanding of bodies that we have inherited from the dominant Western metaphysical tradition. As watery, we experience ourselves less as isolated entities, and more as oceanic eddies: I am a singular, dynamic whorl dissolving in a complex, fluid circulation. The space between ourselves and our others is at once as distant as the primaeval sea, yet also closer than our own skin—the traces of those same oceanic beginnings still cycling through us, pausing as this bodily thing we call “mine.” Water is between bodies, but of bodies, before us and beyond us, yet also very presently this body, too. Deictics falter. Our comfortable categories of thought begin to erode. Water entangles our bodies in relations of gift, debt, theft, complicity, differentiation, relation.3 (Astrida Neimanis) 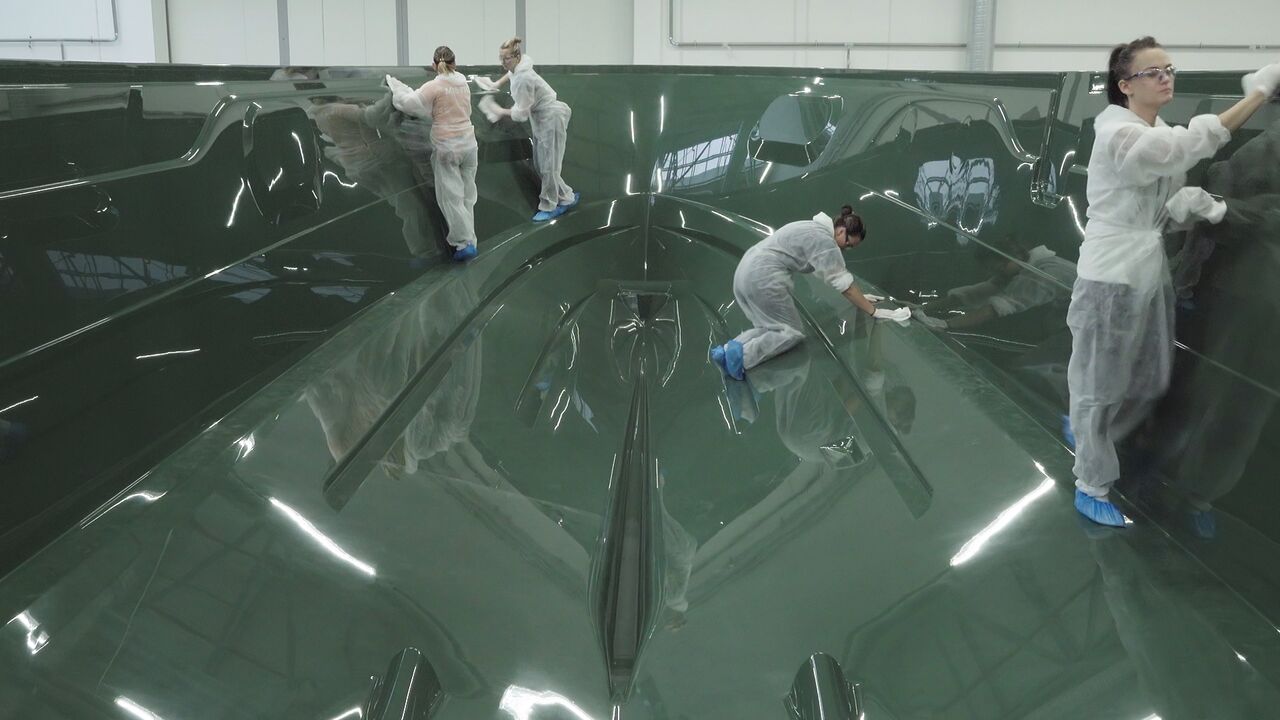 The reflection over the relationship between a human and water is a truly interesting area of eco-feminism’s consideration. It ponders over the transformation of an agreement between the human and non-human world. The question about water access has economic, political and cultural meaning, not only because of the increase of population and industrialisation. Astrida Neimanis says directly that in Anthropocene the question about a place and meaning of water is a basic and inescapable question. What is interesting for me the most is an invitation to learn to co-exist with others through thinking with water.

In a metaphorical film denouncing contemporary fluid-like reality, which was made for an exhibition in Savvy Contemporary, Barbora Kleinhamplova used seasickness to tell a story about the ravishing us all illness of neoliberalism. A group of young consumers, privileged, but suffering – as the curator Karina Kottova writes about them – sailed a yacht during their care-free holidays. But everything turned out to be a never-ending fight with sickness and being fixed in present continuous (il.2). The viewers are placed in a situation in which it is very difficult to keep the distance and balance. The film belongs to an installation in which the artist put together images seemingly attractive with boring and dangerous work – the shining surface of luxurious yachts stood in opposition to a monotonous work of women polishing them. They put their health at risk in a factory by abiding all day in chemical vapours (il.3). In a sense, the space of Savvy – a place, which is thriving living ‘ideas’ lab’ in a former crematorium, represents the best the dichotomy of something enticing and repelling.

Kleinhamplova talks about fever consuming the world. She talks about the potential of an ocean, as a metaphor, immersed in reality as an area, which became strongly dominated by politics. In the ocean, we may find everything we want to hide, we want to throw away from our smooth-surface world of consumption: plastic, pollution and rubbish. By polluting the ocean we pollute ourselves. The recently published research shows that microplastic has been integrated into our bodies. Water, then, connects the human not only with nature.

According to Neimanis water connects the human scale with other life scales: genealogical, geographical or organic.4 Those propensities of water are used by Kleinhamplova in her installation to talk about the ecosystem of the capital’s power. The metaphor of water serves here as a medium to talk about the individual and collective bodies, about the end of neoliberal capitalism, and about the present pharmaceutical corporations as well as about the well-fed illness of the North. (Flows of power are inaugurated between marine life, human bodies in pain and Big Pharma5 as Neimanis writes.)

The politics of water became also a focal point for the exhibition accompanying meeting with Heidi Ballet (Conversations on the Politics of Oceans) during which Ballet spoke about the responsibility resulting not from the fact that we rule the world, but from the fact that everything that we have at our disposal, who we are is organically connected.

The ocean might not be very accommodating. Still, they are the ones on board, while others are drowning. (Karina Kottová, a fragment from the curatorial text) 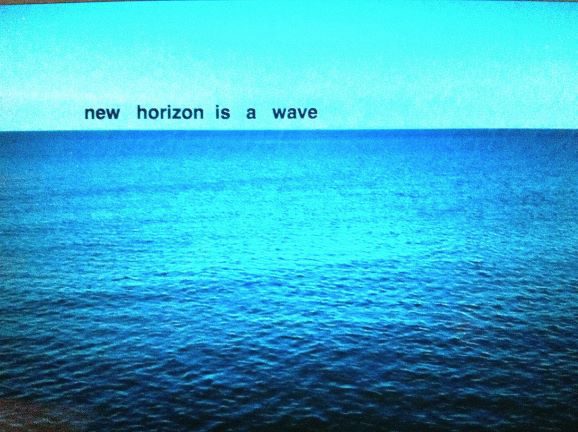 The postcard with ocean waves. New Horizon is a Wave. (il.4). The work by Ewa Partum, which was realised at the time (1972/2006) when the ocean possessed completely different metaphorical potential: was simply a visualisation of infinity. Today, the sea view is a visualisation of Western/Northern guilt. This dichotomy between art and life, which entered the art, was used by Manthia Diawara in the film entitled An Opera of the World.

An Opera of the world is a project putting together the fragments of an opera Bintu Were, A Sahel Opera (Bamako 2007) with documentation of sea crossings done by refugees. The images of infants drowning in the sea are set with commentaries by Fatou Diome, Alexander Klunge, Nicol Lapierre, Richard Sennte and Diawara concerning the migration and opera institution in Western culture.  The space of ocean, where dramatic meetings happen between the drowning migrants and life-savers, is opposed with the space of culture within which the dramatic story about the migrants travels from Africa to Europe became framed into an opera. The affective images of a waterfall into the memory: in the Diawara’s film, water was represented as an archive of unheard, non-articulated stories. Both spaces – maritime and cultural –– were represented as the flow places, the places of exchange, migration and hybridisation.

Astrida Neimanis proposed a hydro-logic, as a system allowing to re-order the world anew – without differentiating into the biological and cultural, ours and alien. The hydrologic, according to the author, allows for the emergence of the new understanding of a human body and society. It generates also new language: the attempt at it, I heard during the mentioned above panel in HKW, when a poet – Hinemoana Baker said that she was a river too.

I am the last born and I have a long following
Everything and everyone is my elder
I move through the relatives in my green leaves
I eat canoes and drink inlets.