While reflecting in your faces, I learn to love myself 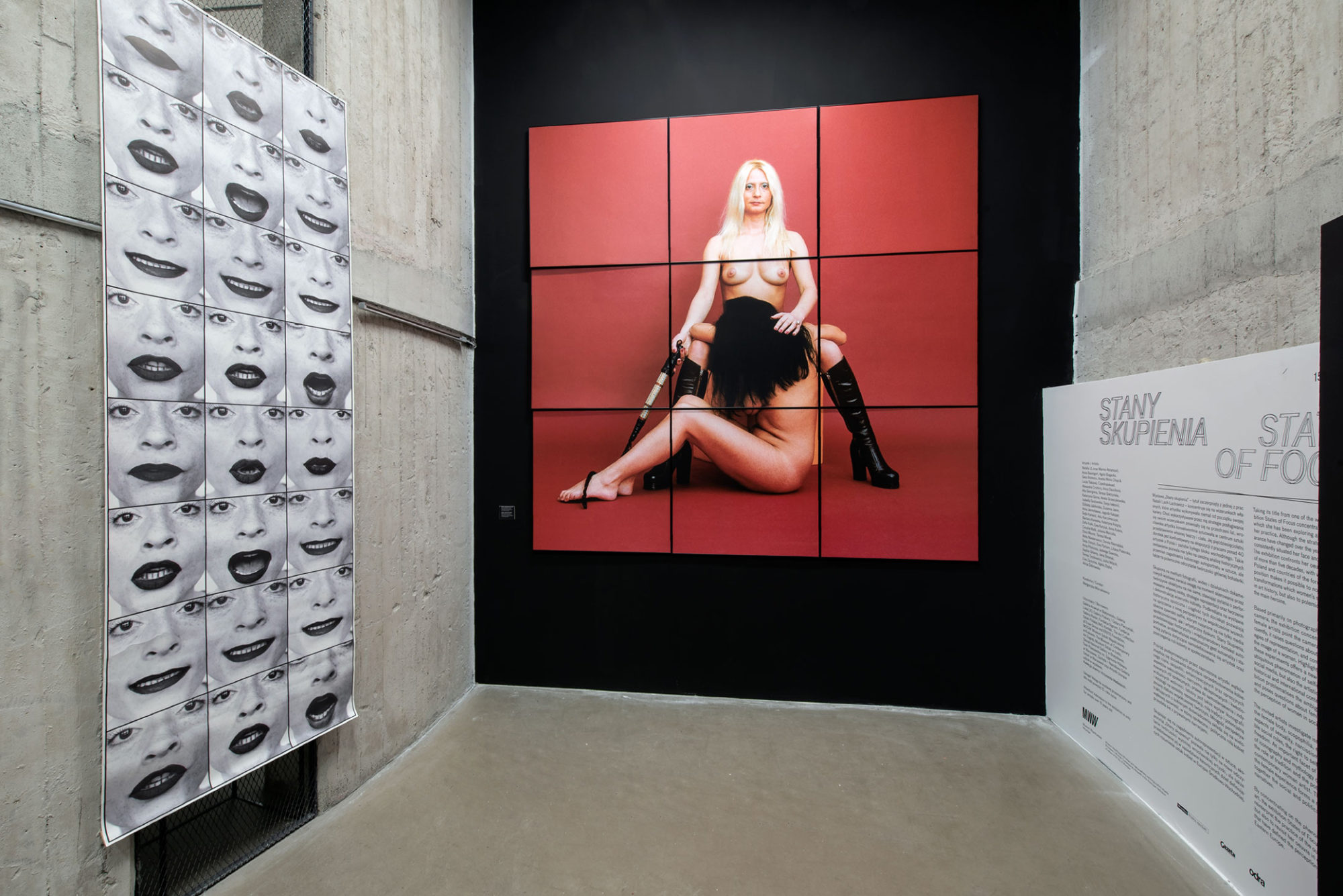 How beautiful they all are! – I almost shouted, while looking at the exhibition called ‘The Physical States’. I was accompanied by two more experienced (in the field of working in arts) colleagues. We were examining an exhibition about women, to be precise, about the representation of women and their power over it. The exhibition presented the works only by female artists. The curator, Małgorzata Miśniakiewicz selected the works according to a geographical key. She presented the art by Polish artists in the context of artists from the former Eastern block countries. The geographical clamp in case of ‘The Physical States’, according to the curator, does not have a trait of fetishisation – poor, but sexy1. It represents a natural choice in case of woman’s image problematisation in the world, where the neighbouring countries are connected by similar way of experiencing the history, and what follows, the similar experiencing of the culture, and the development of discursive roles of media and communication.

We looked at the photographs by Ewa Partum, Ewa Kuryluk and Anna Kutera. There were also, of course, the photographs of Natalia LL, against whose image – quoting one of my colleagues – all other artists of her generation created their images. The pictures were accompanied by photographs and videos of artists from Eastern Europe amongst them Marina Abramovic, Geta Brătescu, Anetta Mona Chisa & Lucia Tkácová, Alexandra Croitoru, Sanja Iveković, Tanja Ostojić. In total, the exhibition presented works by 44 artists from Poland and former Eastern European block. They are not beautiful at all, but they know how to present themselves beautifully – one of my guides responded to my exclamation of surprise and delight. 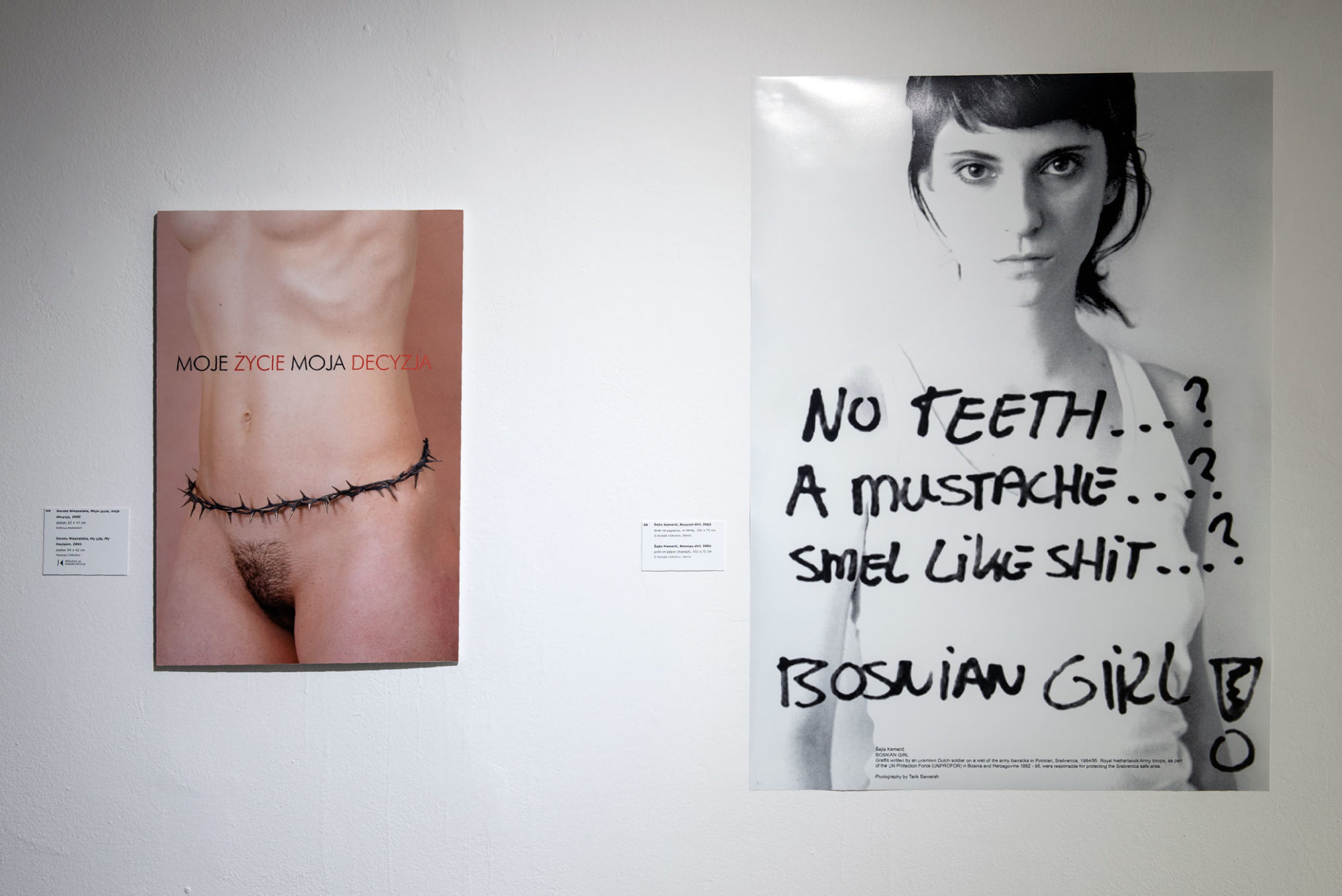 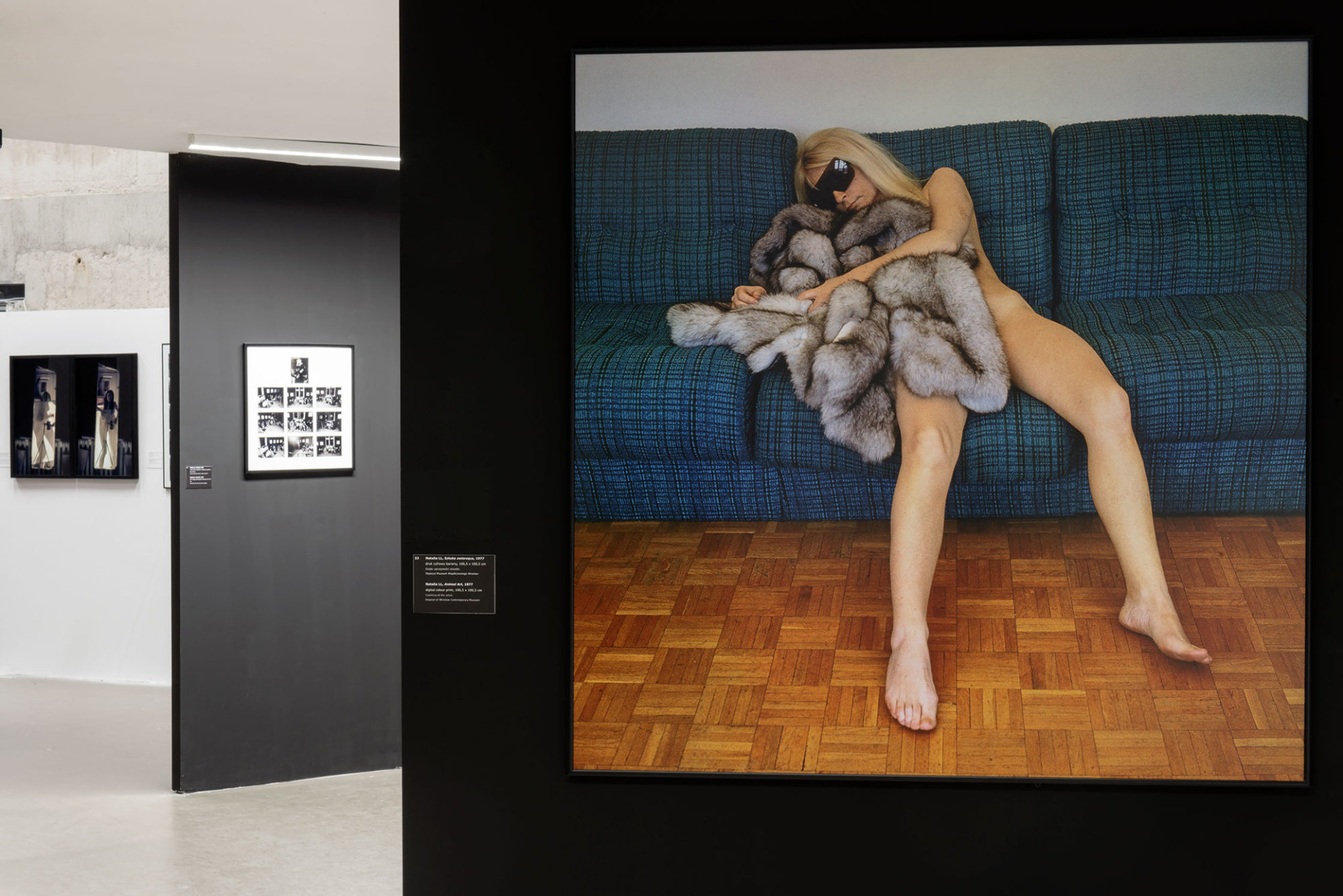 Before I allow myself to get carried away with the unbearable tendency to ‘critically’ pick holes, I want to express a bit of simple admiration: The photographs by Jolanta Marcolla were beautiful, Ewa Partum was beautiful. It was wonderful to look at young Ewa Zarzycka, who was giving one of her first performances in Labirynt Gallery. The force and confidence of Natalia LL was absolutely magnificent when she posed naked irrespectively of her age. The example of Natalia is in this context crucial, as there are legends in Wroclaw about her looks, physical attractiveness and sex-appeal. She does not stop undressing in front of the camera and this is beautiful. The delightful is in the infinity of configuration of female beauty, I think to myself while gathering the view of walls in Wroclaw Contemporary Museum. This is the thought, I took away with my myself, although perhaps the infinity did not sound out enough as it should have. I allow that thought and delight to carry me. While reflecting in your faces, I learn to love myself – sits in my mind and upon leaving the museum, I felt uplifted somehow.

It is later that I embark on critical reflection, which did not allow me to stop in delight. It is true that in ‘The Physical States’ we see the attractive and normative images of women as dominating. It may be an accusation if we want to view the exposition from the perspective of feminism of the fourth wave. The images of illness, old age, degraded bodies, incomplete bodies are next to none. The curator clearly went for narration about the evolution of perception’s power and the power over the female image, where both coupled with the visual attractiveness.

The illness and the degradation of a body were represented at the exhibition by Katarzyna Kozyra in Olimpia and Katarzyna Górna in Fack me, Fack you, Peace, which were presented at the exhibition with the use of large, more substantial than in other works, format. In ‘The Physical States’ we may also find cheeky, abjecting and exploited through the use of size work by Alicja Żebrowska. The lack of inhibitions in showing the ageing body finds no match in the works by Natalia LL, whose pieces played in ‘The Physical States’ a decisively narrative and compositional dominance. 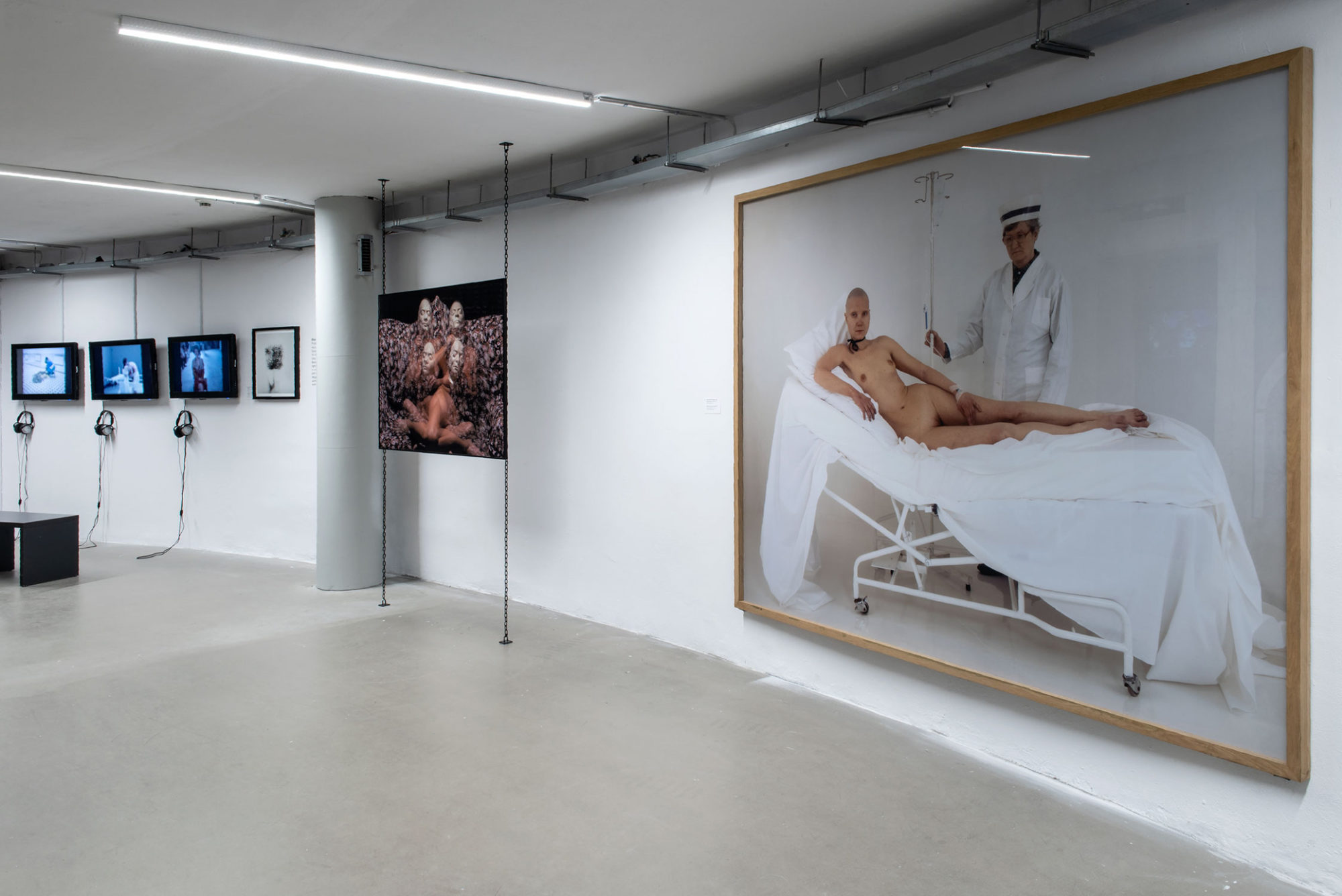 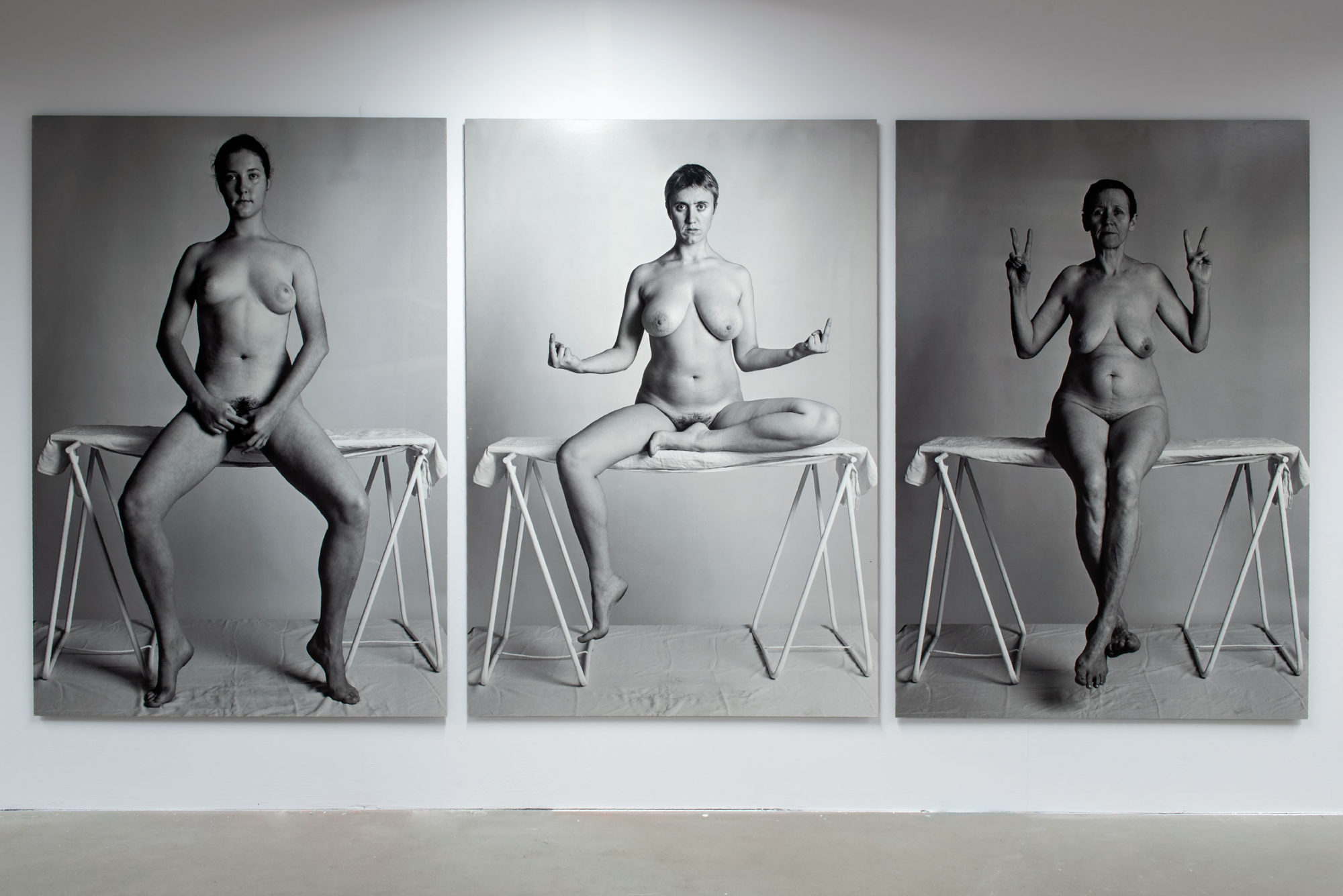 Is it too little? Should we expect more? When we view the photographs by Marcolla, Izabella Gustowska, Tanja Ostoić, Agata Zbylut, we have no doubts that the power over an image – at least in the framework of ‘The Physical States’ – had nothing to do with the visual beauty, even the one understood in an unconventional way. However, I have not got any doubt that this view of the problem may be misleading. In the 1970s the feminists could not forgive Hannah Wilkie that she was beautiful and what was worse – she undressed – she had no wish to resign from her beauty, similarly, she had no intention to resign from making art and being an artist. Not taking this or that artist seriously because of her beauty, or general ‘normativity’ is a faux pas and a banal act. But, when we view a set composed of tens of elements and the set suggests that the women from Central and Eastern European block were largely interested in creating their representation (mostly attractive and within the ‘average’), and they practised in a political vacuum then I disagree.

When I wrote ‘political vacuum’, I did not see the exhibition as non-political. The power over the image has a political nature. And does the selection of names according to the geographical key. I noticed in the exhibition moments which signalised historical-political events, which were crucial for the region. In my opinion, there were not enough of them, especially if the curator had some ambitions to delineate the narrative based on the history of the former Eastern block. The chronological order and selection of names determined by geo-politics seemed to suggest that. When I say ‘vacuum’, I believe that ‘The Physical States’ lacked a comparison, sketching a constitutive exterior2 – to use the term proposed by French theorist and the philosopher of politics Chantal Mouffe – against which there could have emerged a character of the images of the Eastern European artists. 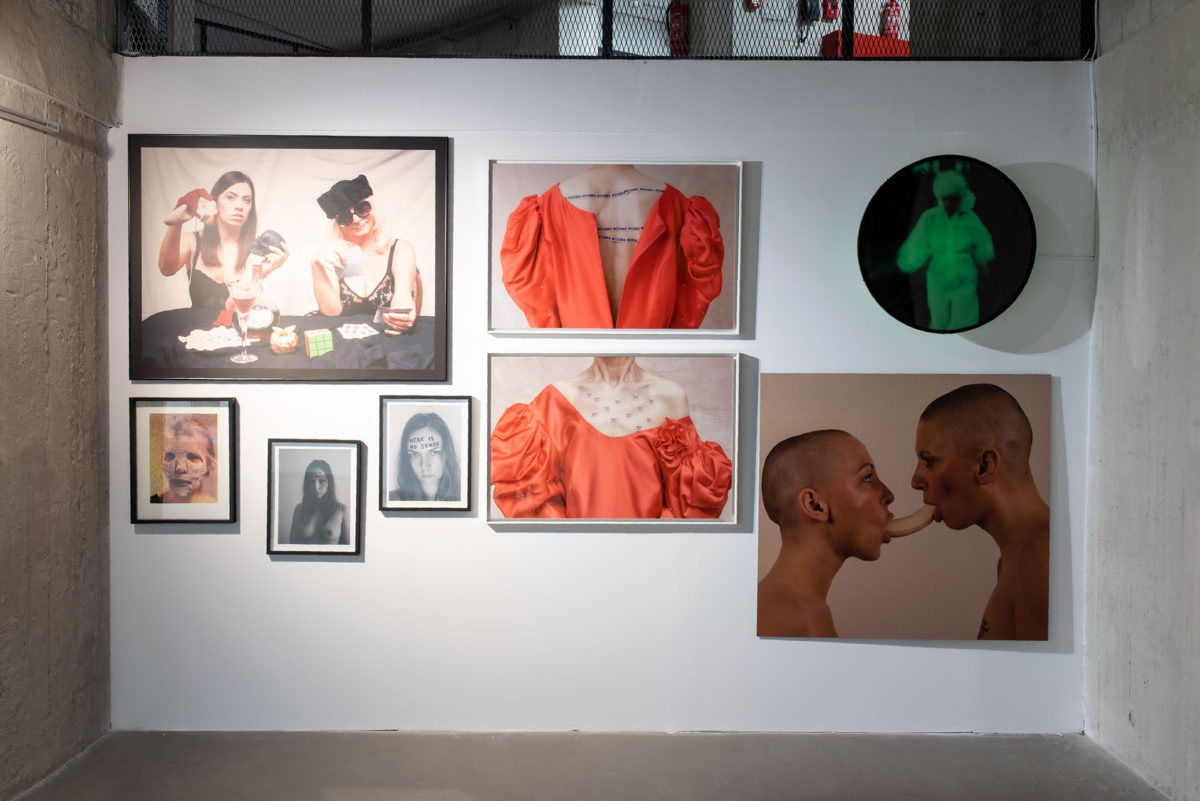 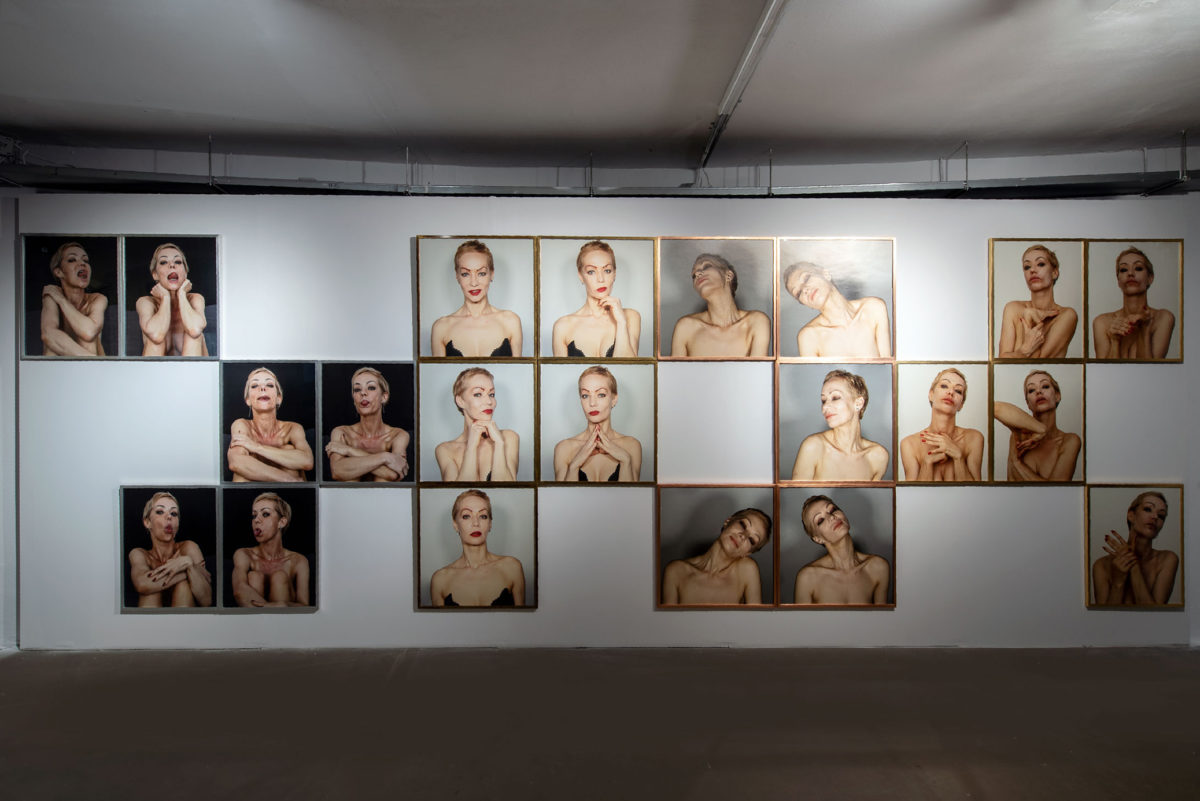 I was born after the fall of the iron curtain, but it does not seem to me that women here created without looking at (the imagined or mythologised) representations of women over the other side of the wall. If there are any characteristics of the art in the region, it must have been conditioned politically, but also it was rooted in separation, rejection, reference or mimicry of what was inaccessible. The quoted above Chantal Mouffe in theory of constituting the exterior claims that no I/We is created without a relation with You/They.

The construction of identity according to the French researcher never happens based on the positive definition of what constitutes me. It possesses a negative character, it pertains to defining what I am not3. The chronological narrative in ‘The Physical States’ guided the viewer through a history of perception and representation of female artists from the 1960s until now. During that time, we witnessed four waves of feminism, which influenced how and what the artists behind the iron curtain created. Certainly, considering Polish character in the global context, in this case, seems to be missed, however seeing the topic in a complete separation from the Western culture appears to be a sidestep too. It is because irrespectively of political isolation of the countries from the former Eastern block, the inhabitants of that region viewed the Western culture as the main point of reference in constructing own identity.

We may consider, from a completely different point of perspective, the exhibition called The Independent, which happened last year at Vistula River. The curator of the exhibition decided to show the issue of independence from a perspective of emancipation potential carried within it. Magda Lipska, the curator of The Independent did not rest with a simple report of the women’s presence in the history of Polish independence. The works by Polish artists (i.e.: Anna Baumgart, Ewa Cieplewska, Katarzyna Górna, Aleka Polis, Jadwiga Sawicka) were juxtaposed with the works of women from the Republic of South Africa, Chile and Eastern Europe. This could be interpreted as not only a politically correct inclusive gesture but also an act of turning our attention to the fact that women’s rights are universal. We deal with the global struggle, where our Polish history is not exceptional or privileged. 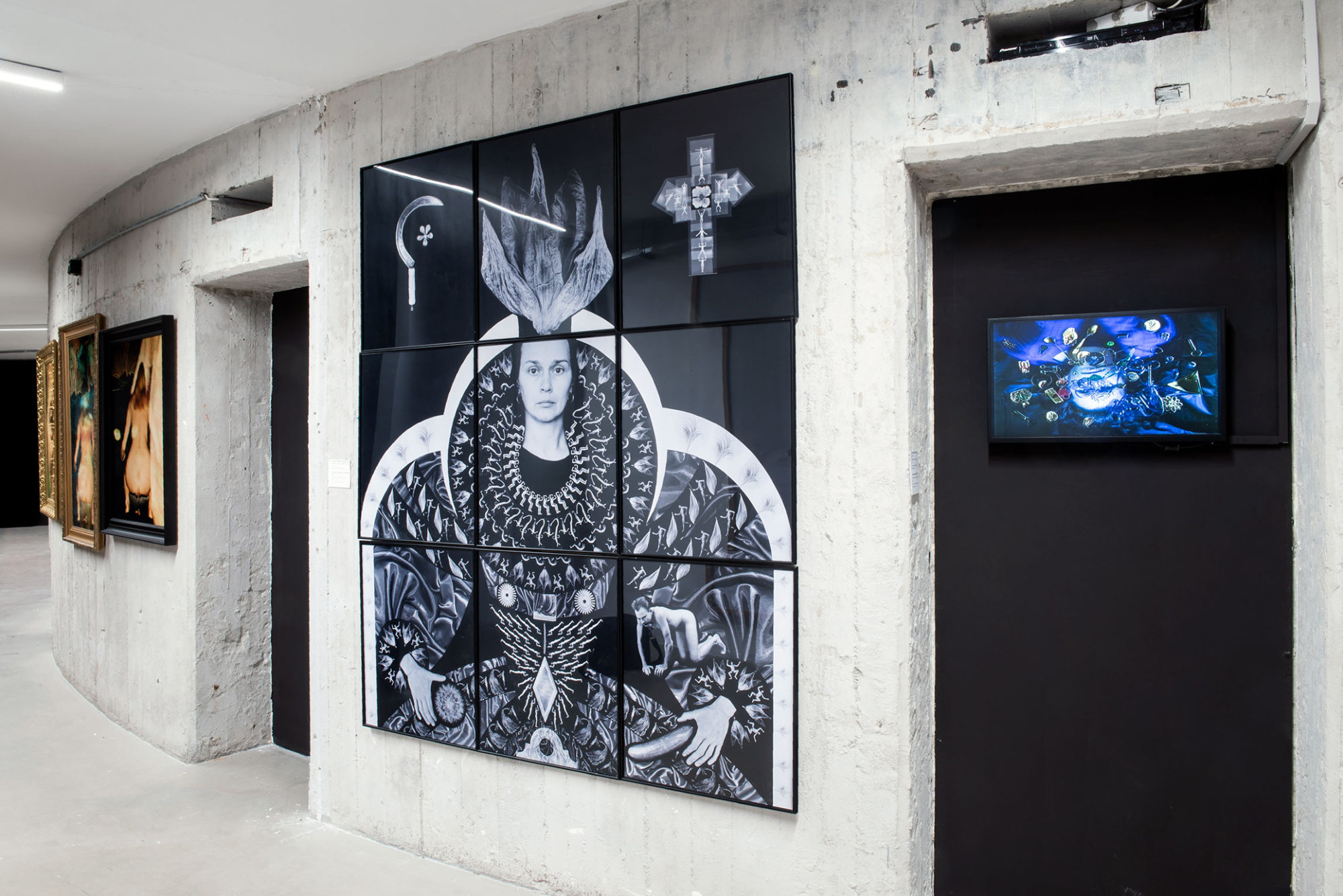 From the left: Alicja Żebrowska, from the series "Kindling", 1995, courtesy of the artist; Zofia Kulik, "Magnificence of herself III", 1997, collection of the ING Polish Art Foundation; Anna Płotnicka, "Infinite Film", 1997, Collection of the Lower Silesian Society for the Encouragement of Fine Arts. Photo: Małgorzata Kujda © MWW, 2019. 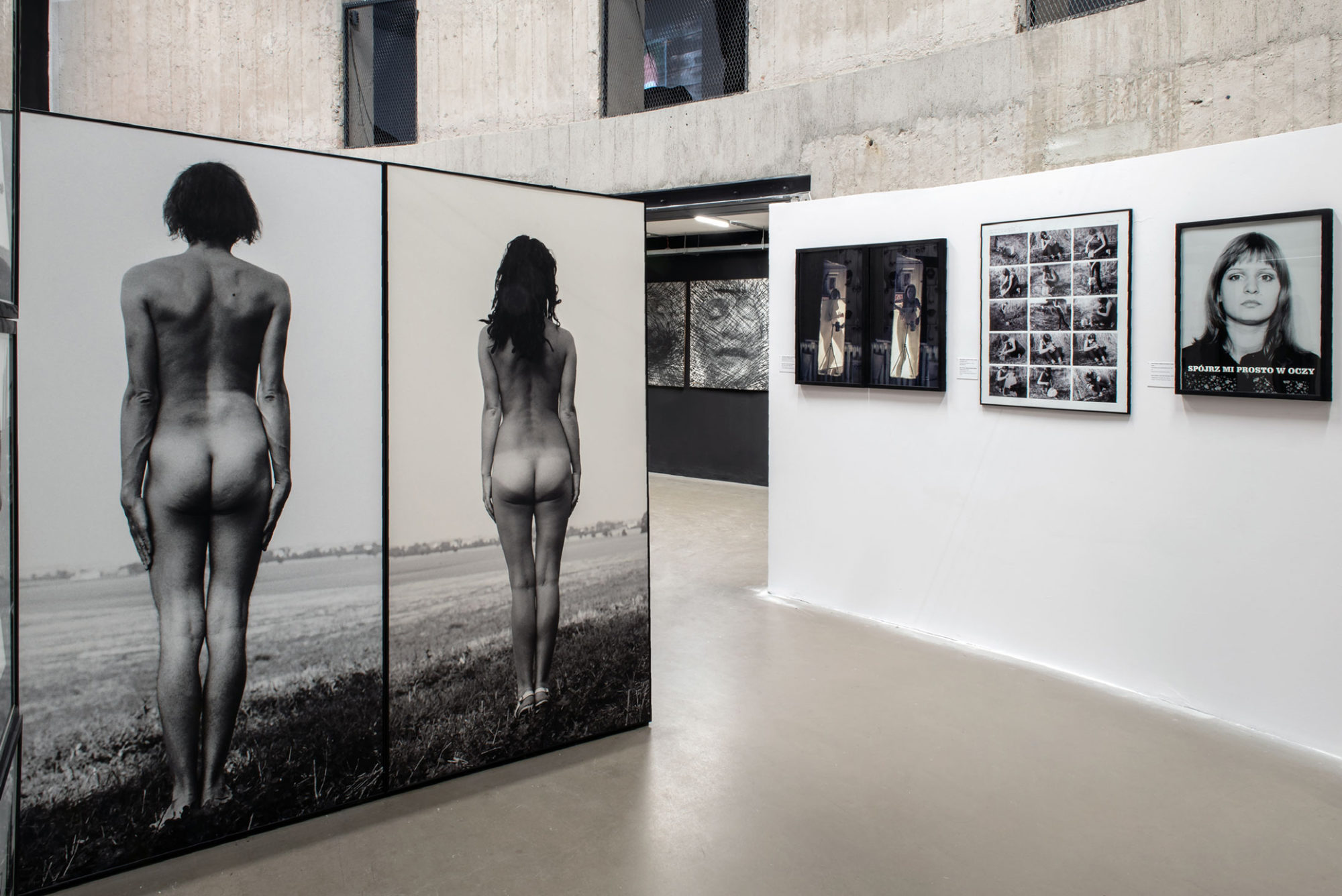 From the left: Natalia LL, "Body Topology", 1967, courtesy of the artist and the gallery Lokal_30; Zofia Kulik, "Self-portrait with layers: I mirror screen, light", 1970, courtesy of the artist and Żak-Branicka gallery; Dóra Maurer, "What can be done with paving stones?", 1971, MOCAK collection; Anna Kutera, "Look at me straight into the eyes ", 1973, collection of Wrocław Contemporary Museum. Photo: Małgorzata Kujda © MWW, 2019.

‘The Physical States’ and ‘The Independent’ are two exhibitions about women told by women (artists and female curators). What differentiates them from each other is the question of an inclusive or exclusive geographical key. The first exhibition is about the representation of women and the power of perception. We learn from it that the power is coupled with a skill of operating the media and ability for an attractive, intriguing, surprising, cheeky, sexy, etc., (re)presentation. ‘The Independent’ from this perspective appears as a braver, cheekier, more engaged exhibition, which was not calculated to become a normative museum exposition, but a political intervention, even if some people may see it as not entirely successful. That breach is seen fully when we observe the formal structure of exposition.

‘The Physical States’ is a museum-based exhibition. It uses a linear narration and chronological order, which allowed us for a logical and orderly view of the evolution in the representation of female body, perception and image. ‘The Independent’ was shaped by Lipska into a labyrinth, which problematised the linear nature of narration and resulted with corporeal returns of the viewer to selected threads as well as re-considering them in constant ‘expanded field’ of the entire exposition. It was achieved by the partition walls, which due to their height and width revealed the view towards the rest of the exposition while at the same time it subjected the viewer to mobility according to the shape of the labyrinth. The structure not only depicted the universal nature of the female history but also reminded us about the global political distribution of forces which largely tend to tell the story. Yet another take on telling a story about women’s force is ‘The United Pangea” presented at Art Museum in Łódź, whose curator Joanna Sokołowska does not use women to be the exclusive topic of exposition, but she writes them into the network of inter-species connections. While talking about women, she reminds us of the fact that we are not the only inhabitants of the planet. Perhaps the key to love yourself more is to love the diversity of not only women but – the world?

Ultimately while thinking about ‘The Physical States’ and ‘The Independent’ I am under an impression that both exhibitions got carried away with realising binary sets of concepts such as universality – individuality; inclusivity – operating with a fragment; reactive-based – museum-based. That lack of balancing the middle path makes me look (from a distance of a viewer without any responsibility for the exhibitions) at the exhibitions as examples of two co-existing presently fashions in academic and artistic communities – fashions for Central-Eastern Europe and intersectional fourth wave of feminism. 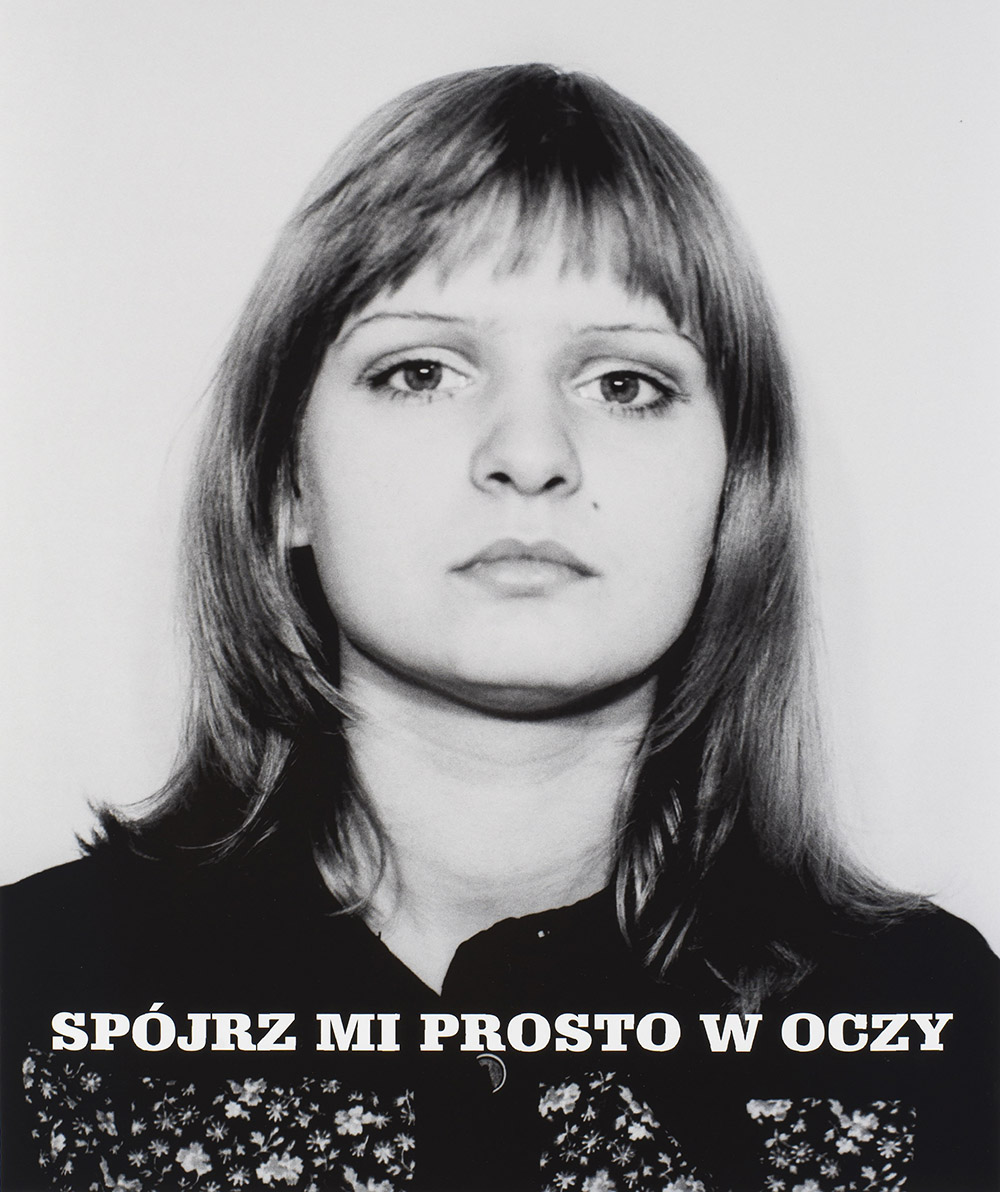 1 The phrase has been borrowed from the title of a book by Agata Pyzik, see A. Pyzik, Poor but sexy. The Cultural Clashes in the East and West of Europe, Gdańsk 2018.