One is not born, but rather becomes a disabled person 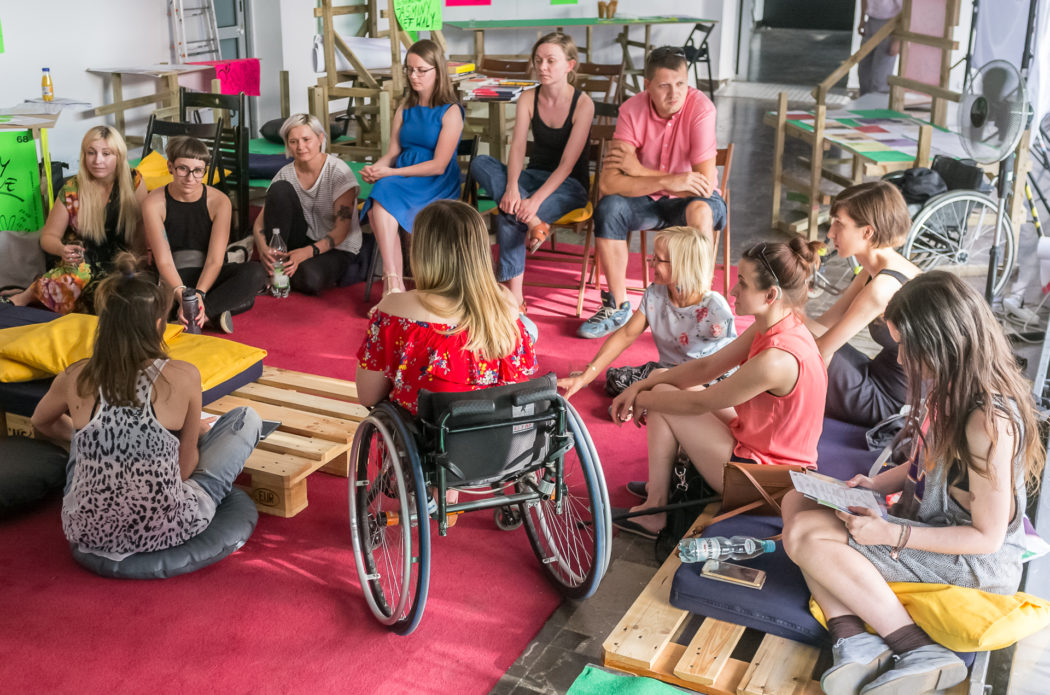 One is not born, but rather becomes a disabled person – to paraphrase a famous quotation from the ‘Second Sex’ by Simone de Beauvoir. In a similar way to women, who are bound by expectations concerning the cultural dimension of their sex and trained to the role of structurally weaker, the disabled people tend to clash with excluding environment, which forces them to become dependent.

In a friendly space for people using mobility chairs, in which messages for the sand-blind people would be translated into Braille and abler people would remain aware of the needs of others, the degrees of ability would manifest in the choice of a lift over stairs, sound instead of text, a tram with lowered floor in place of a city scooter, but there would be nothing limiting the freedom of movement and access to common spaces.

I am certain that disability manifests itself not only in obstructed access in urban areas but also in the economic status, and most of all in a paternal mentality that assumes that people with disabilities are not fully fledged subjects. This approach results with refusing their political and personal rights. They are deprived of a possibility to imagine a future which would be independent of their caretakers, as well as deciding about their bodies, sexuality and reproductive rights. The passivity of disabled people was definitely negated by the last year’s, 40-day-long protest in the Polish parliament. The social, economic and political change, which was demanded by the disabled and their supporters is shared by all emancipatory movements (feminism, LGTBQ+, Black Lives Matter, immigrants’ and economically excluded people’s groups, etc.). It results from a disagreement towards the impossibility to adjust to the reality shaped to the needs of fully-abled, white, heterosexual, economically privileged men, which don’t include the perspectives of others, especially the ones with various degrees of ability. In opposition to the visually attractive LGTBQ+ parades, which even though colourful and peaceful are met with aggression in Poland (i.e: the equality march in Gniezno), the protests of disabled people are socially accepted, but their aesthetics is far from the Instagram conveniences. Thus they are often sentenced to the virtual non-existence. 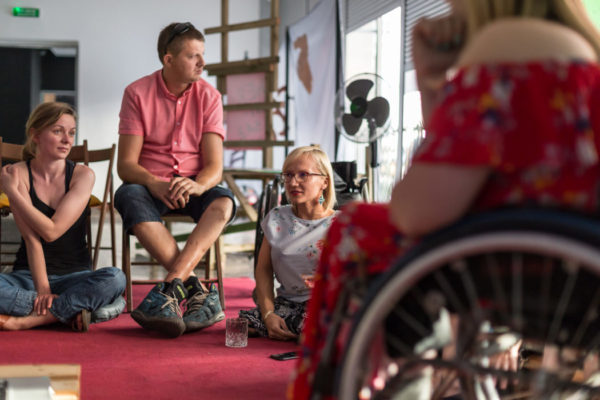 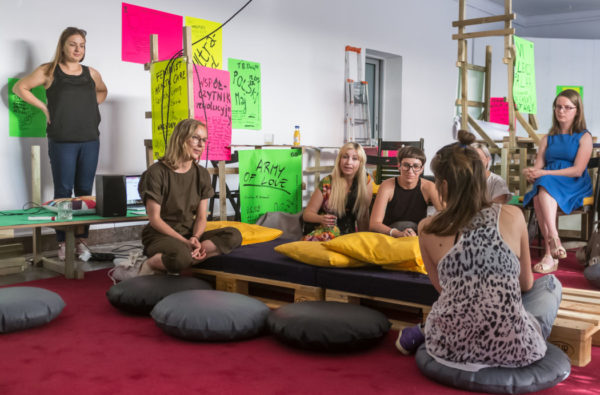 For that reason, the 5th issue of RTV Magazine is dedicated to the disability in art, theory and activism. We want that to be visible. We want to consider the possible alliances amongst various freedom movements. In previous issues of the magazine, we considered how to make the world more sensitive towards the needs of the non-human beings. We need to internalise that we do not live on Earth by ourselves. We belong to a complex ecosystem. How we live influences the wellbeing of the entire planet. This form of sensitivity is also needed to introduce the changes inside the human society. We have to understand that our individual needs are not the same. The differences apart from gender, race, sexual orientation, economic and symbolic status stem also from the degree of (dis)ability of the bodies we live in.

We would like to propose mixing the codes, so that the tested representative strategies worked out by the queer and (eco)feminism movements, anarchism, socialism, but also religion and patriotic groups – here understood as the ones, which take responsibility for the society, which we co-create – could be put to fight for good conditions of life for the disabled people. We are talking here about conditions in which disabled people are excluded by the system. Nancy Mairs – a Catholic and feminist writer suffering from MS – talks about ‘habitable worlds’. It means that people with disability may co-create a social space in all dimensions: institutional, cultural, social and legislative. The status of disabled people could change from the dependent to the decisive. For Rosemary Garland-Thomson – a researcher and activist fighting for the rights of people with disabilities, who is also a professor at Emory University in Atlanta (USA) – the degree of social inclusivity, which we co-create, is directly related to the answer to the question about how we want to build and inhabit our contemporary world.

‘The environment, which we created in the past centuries, does not fulfil in many respects the criteria of the world, which could be inhabited by people with a varying degrees of disability. Our efforts predominantly focus on the elimination, not the barriers making it impossible for those people to participate in social and cultural life, but on eliminating the disability perceived from a medical perspective as a deficit and anomaly.’*

In the 5th issue of RTV Magazine, we express the disagreement for that kind of exclusion. We see in disability a balanced diversity.

In Poland, it is Theatre 21 from Krakow that hails the revolution. The group recently visited Poznan (more about it in the text by Ewelina Jarosz). The performers consist of fully-abled actors and the ones with the Down syndrome. The group uses Drag strategies (changing clothes in order to manifest positive diversity). The theatre published an anthology of texts about disability representation in art: Regaining  Presence. Disability in theatre and performance (2017). 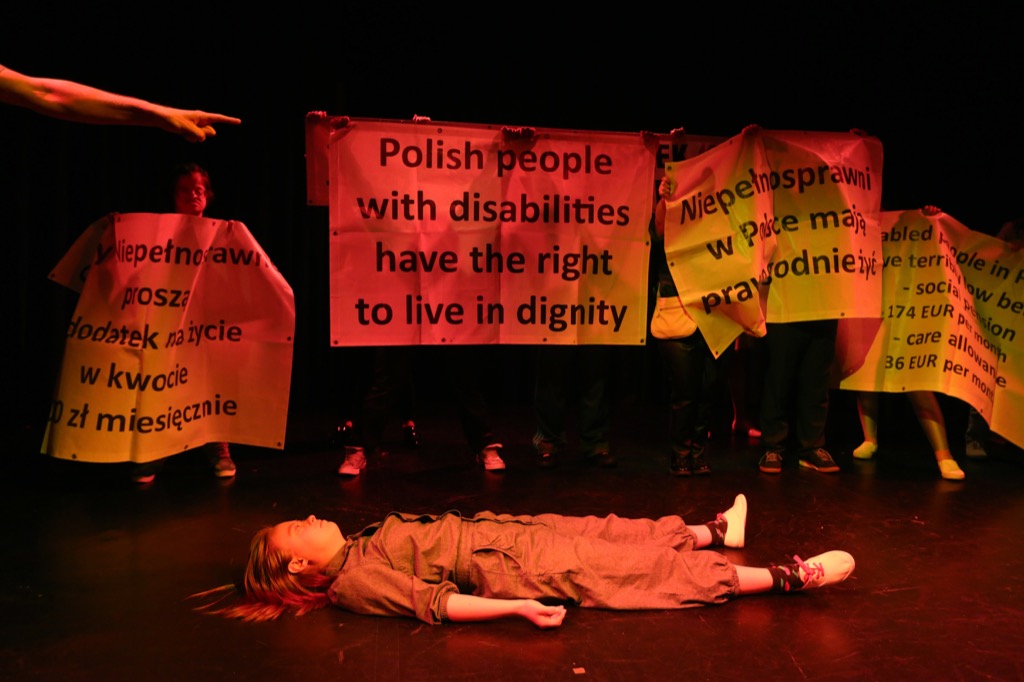 Photo of Grzegorz Press documenting the performance of Teatr 21, "Revolution, which was not there". On the picture is depicted a lying female figure, behind her are inscriptions in Polish and English from the protest of people with disabilities in the Polish Parliament in 2018.

Disability Studies in academic world, which encompass social studies, therapy and rehabilitation, have moved into the area of humanities and cultural studies. Magdalena Zdrodowska (PhD) from the Jagiellonian University is one of the promoters of the expansion of the identity studies to cover the issues related to disability. The topic of disability, as it is addressed by Zdrodowska, appear more and more in the magazines dedicated to culture i.e.: Contemporary Culture – discussing the relationships between technology and disability, Fragile. Cultural Journal (discussing the analysis of disability representation in film, comic books and literature) or Studia de Cultura (a volume dedicated to Polish studies of disability). RTV Magazine joins that trend with the topic of the 5th issue.

In Krakow, there is an association called Strefa Wenus z Milo. We publish here an interview with Katarzyna Żeglicka, who was the chairwoman of the association, she is also an activist and a dancer. In Warsaw, we find a group, which has been sculpturing, painting and performing for the past 25 years. Grupa Nowolipie gathers, amongst others, people suffering from multiple sclerosis. You may read more about the group in Affirmation section I would like to thank here Izabela Skonecka for letting us use the reproductions of Nowolipie group and Adam Mazur for the inspiration to write the article.

In Poznań, the Mermaids, with various levels of ability, practice diving. They are associated in the Diving Collective Bojka. During the Workshops in revolution, which took place in Arsenal Municipal Gallery in Poznań last year, there was a discussion organised by Anna Rutz, Barbara Sinica, Magda Szewciów, Katarzyna Pierzynowska, Aleksandra Majer, and Paulina Banaś concerning stereotypes about all women, especially those with disabilities. During the event, the participants could watch a film about the female divers ‘The Great Blue’. 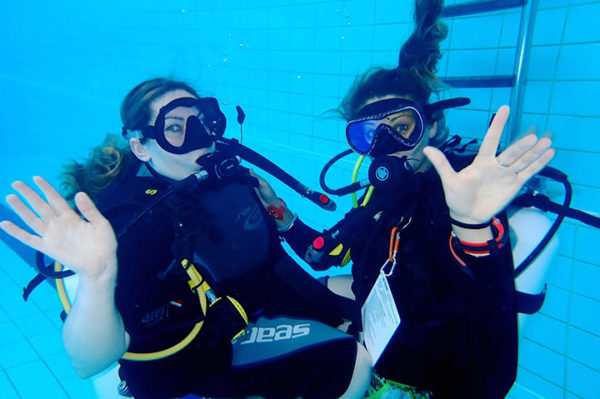 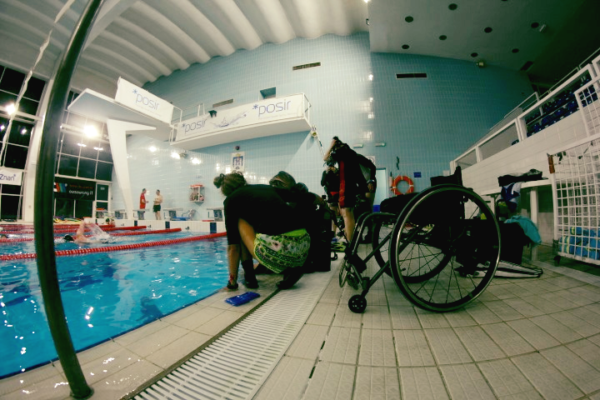 The initiative called Nice People from Poznan focuses on equalising chances and fighting with discrimination of all marginalised groups including disabled people. {http://mililudzie.org} TAK Gallery exhibits and promotes artists from the outsider art. In the text by a curator Malgorzata Szaefer entitled ‘Carmela Melina Riccio / I am the star’, which we publish in the Affirmation folder, you can find more about art practised outside its commercial and institutional circulation.

Additionally, in the 5th issue of RTV Magazine we analyse with Stefanie Wiens from Berlin initiative Platz da! the politics of exclusions in cultural institutions. We attempt to show how to change the situation so that people with disabilities could be included in the stages of creating programmes, where they would not only be the participants of the workshops, in fact, dedicated only to their disability. In an interview with Christian Bayerlein and Grit Uhlemann from the Army of Love collective, we talk about art seen as a constantly expanding field of participation. We also internalise the criticism of the avant-garde as an anti-social practice, concentrated on satisfying the needs of its fully-abled creators. We also travel to Wroclaw to examine critically with Daria Skok an exhibition entitled The Physical States presented at The Contemporary Museum.

The question of disability in art has been rather vibrant; artists undertake that topic in their works, for example, Romily Alice Walden and Michal Baldyga – both presented in The Art Channel. The bottom-up initiatives and institutions more and more take into consideration the perspectives of people with disabilities in their activities and programmes. The critics draw our attention to not only the substantive content but also the accessibility of the exhibitions. The true change shall happen when Open Calls start to include the possibility of using the speech synthesiser, or residences for artists shall take into consideration the needs of the ones in wheelchairs. We would like to see people with ‘distinct’ disabilities to be employed in managerial or other positions. We also want the art world to critically counteract the exclusion on which the symbolic capital has been based so far. This is work that we need to do collectively. This change will not be possible without financial support from the state and local authorities as well as the friendliness of fully-abled producers and art users. We hope that the 5th issue of RTV Magazine shall encourage the change.